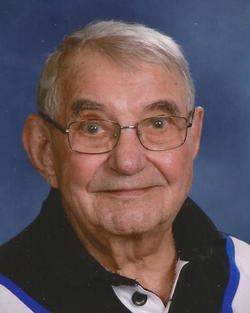 Alberto Mario Fabbro, 93, of Pitt St, passed away peacefully with his family by his side at St. Luke's Hospital on October 29, 2016. Al was born in Duluth on May 5, 1923 to Italian immigrants Maria (Scalbi) and Mario Fabbro. Al graduated from Morgan Park High School in 1941 after which he was employed by USS. In 1942, he enlisted in the US Marine Corps and proudly served his country as a Corporal, during World War II in the Pacific Theatre and was awarded the Purple Heart. He was a member of the 3rd Battalion, 26th Marines, 5th Marine Division, "Semper Fi". After honorable discharge, he resumed working for USS in 1945. When USS Duluth closed, he was employed at Diamond Tool and Horseshoe until his retirement in 1989. Al's Religion was very important to him. He was a member of St. Michael's Catholic Church for several years and for the past 30 years, attended Zion Lutheran Church with his wife, Betty. Al was a tender hearted and extremely ambitious man, and was very fashionable and dressed to the 9's. Al was a skilled craftsman, building and crafting anything and everything for his family and others who valued his eye for perfection. As an avid outdoorsman, Al was a member of the Lake Superior Hiking Association and the UMD Outdoor Group. He was also a member of the Swedish Cultural Society of Duluth. He enjoyed other activities, including reading, gardening, drawing, dancing, skiing, traveling and cooking for his family every Sunday. His best furry friend was his Jack Russell Terrier, "Jackie". Al was preceded in death by his parents; sisters, Othelia Ruth Jaax and Connie Candida Basic; brothers, Lino Fabbro, Varisto Fabbro and Floyd Fabbro; infant daughter, Susan and first wife, Fern Papaik Fabbro. Alberto is survived by his loving wife, Betty Selnes; stepchildren, Arne (Karin Diver) Selnes, Teresa (John) Bartsias and Sharon (Jeff Leadstrom) Kurosky; step-grandchildren, Nick (Laura Eisenman) Selnes, Rochelle Diver, Karissa (Robby Haugen) Bartsias, Jenna (Adam Link) Bartsias, Kapri (Kevin) Hair, Megan (Tyler Troy) Kurosky and Mandy Kurosky; step-great-grandchildren, Nolan and Gracie Selnes, Amira Wynn and Royce Haugen and Kaci Hair; nephews, Bob (Louisa) Fabbro and Dick Fabbro; cousins, Lino and Valdi Fabbro in San Vito Di Fagagna (Udine) Italy; his furry friend, Jackie and his first wife's children and grandchildren. The family would like to thank the staff at the MN Veterans Home in Silver Bay, MN and St. Luke's Hospital 6th Floor ICU for their excellent care. Visitation 10 until the 11 a.m. memorial service Friday, November 4, 2016 at Zion Lutheran Church. 2431 West 3rd St. Rev Judy Anderson-Bauer officiating. Military Honors by the Duluth Honor Guard. Memorials to Zion Lutheran Church or Lake Superior Hiking Association would be appreciated.

To send flowers to the family in memory of Alberto Fabbro, please visit our flower store.