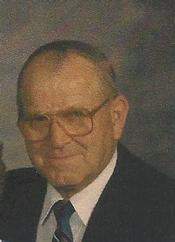 Andrew J. "Andy" Dunaisky, age 90, Hermantown, died July 18, 2012 at St. Lukes Hospice. He was born in Duluth on July 8, 1922 to Adrian and Victoria Dunaisky. He had attended St. James School, West Jr. and Denfeld High School. In his early years he worked with the CCC constructing the Gunflint Trail. Andy married Irene Klejeski in Duluth on April 18, 1953. He had worked at Elliott Packing Company for 34 years. After his retirement Andy worked at the former Foley Funeral Home and later for Williams-Lobermeier Funeral Home in Duluth. He was a member of St. Lawrence Catholic Church where he had served as an usher, member of the Friars of St. Francis and retired teamsters Local #346. He had also served as president of his bowling league and horseshoe club. Andy is preceded in death by his parents, brothers Adrian and Florian and sister Gertrude Mitchell. He is survived by his wife, Irene, children James(Sherry), Wrenshall, MN, Andrea(Dennis)Newton, Lexington Ky, Joseph(Becky), Randall, MN, Sally(David Moczygemba),Schertz, TX, and grandchildren Ryan and Tyler Newton, Anna Dunaisky, Jonathon and Emily Dunaisky and Derek Moczygemba. Visitation 3:30 until the 4:30 Mass of Christian Burial Today, July 20, 2012 at St. Lawrence Catholic Church. Friars of St. Francis Rosary will be at the church at 3:30. Burial at Polish Catholic Cemetery. Arrangements by Williams-Lobermeier-Boettcher funeral home. Memorials are preferred.

To send flowers to the family in memory of Andrew Dunaisky, please visit our flower store.