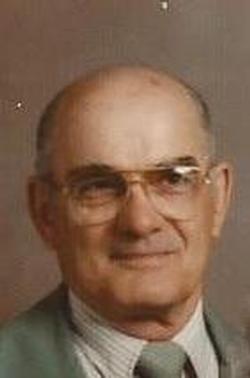 Anthony Joseph "Tony" Verdoljak, 97, of Duluth, passed on Saturday, September 6, 2014. Tony was the 2nd of 7 children born in Duluth on December 15, 1916 to Mate Vrdoljak and Kata Bonacic-Civran Vrdoljak. In the late 20's, the family moved 'on the farm' in Superior Township, WI. During the 30's, Tony was with the Civilian Conservation Corps at Camp Skagit, Washington. Upon returning to Duluth, he married Mildred Pollock Willis on November 19, 1938. Tony gained employment as an electrician at the Zenith Furnace which later became Interlake Iron. Tony and Millie were soon blessed with the birth of Jeanne Catherine followed by Linda Marie, Susan Patrice, Peter Anthony and Scott Anthony. Interlake Iron was shuttered by the early 60's and Tony gained employment in April 1962 with the US Air Force, worked in Base Civil Engineering and was an exemplary employee, retiring June 1981. When Spirit Valley was being developed, Tony & Millie left West Duluth and moved to Anderson Road. Tony created a workshop in the garage and honed his woodworking skills. After Millie passed in her 87th year, Tony maintained the household and eventually chose assisted living. It is remarkable that in his 97 years he was a very healthy man and we thank the caregivers who provided comfort and support when needed. He was preceded in death by his parents; his wife, Mildred; two daughters, Linda Verdoljak and Susan "Suzee" Ramsay; three sisters, Helen Briski, Dorothy Blaisdell and Frances Murphy; two brothers, John and Matthew Verdoljak. Tony leaves behind his daughter, Jeanne (Ronald) Koneczny of Duluth; two sons, Scott (Roberta) Verdoljak of Duluth and Peter (Barbara) Verdoljak of Cerritos, CA; a sister, Rose Vokovich and sister-in-laws, Lucille Verdoljak and Ramona Verdoljak all of Superior, WI; three granddaughters, Tanya (Brian) Loker, Andrea Verdoljak, and Anastasia Verdoljak; four grandsons, Todd (Edie) Koneczny, Jerome (Rhonda Zacher) Koneczny, Reuben (Annie Johns) Verdoljak and Anthony Verdoljak; great-grandson's, Logan Koneczny and Trent Koneczny and four step-great-grandchildren; Lenny, Gary, Shannon and Dawson; nieces, nephews and their extended families, as well as many dear friends. Visitation 5 to 7 p.m. Wednesday, Sept 10, 2014 and will continue Thursday from 9 until the 10 a.m. funeral service all in Williams Lobermeier Boettcher Funeral Home, 3208 West 3rd St. Burial in Oneota Cemetery. In lieu of flowers, it is requested memorials be made to the charity of your choice. To sign the guestbook on line, visit www.wlbfuneralhome.com.

To send flowers to the family in memory of Anthony Verdoljak, please visit our flower store.