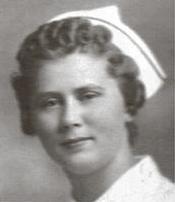 She was a graduate of Mellen High School and received her nurses training at St. Joseph's Hospital in Ashland, Wis Ardith married Edward J. Pufall on Sept. 30, 1942. During her nursing career Ardith had been an RN at St. Mary's Hosptial in Superior, the Pureair Sanitorium in Bayfield, Wis., and retired from St. Mary's Hospital in Duluth in 1978. She then spent five years at the Bethany Crisis Shelter working with emotionally disturbed children.

She had been an active member of St. James Catholic Church, President of it's Margaret's Guild and serving on the St. Jame's Home and School Assn. Ardith was also a member of the American Legion Aux. Post 71 in West Duluth.

She is preceded in death by her parents; husband; daughter Charlene Pufall; brother John and sister Florence Markee.

To send flowers to the family in memory of Ardith Pufall, please visit our flower store.