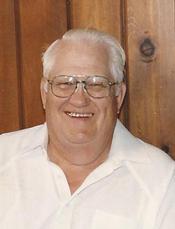 Arne Erickson, beloved husband, father, grandfather, uncle and friend, died on August 23, 2013 at the age of 87. Born in Duluth on February 19, 1926 the son of Marta and Joel Erickson, Arne graduated from Central High School in 1943 and joined the Navy. While enlisted he completed his degree at the University of MN. When the war ended he returned to Duluth and met and married his life-long love, Shirley Ruth Person on May 28th, 1949. They built a life together and raised three children. Arne was an accountant for the DM&IR Railroad, and retired in February 1983 to a life as a grandfather, community member and outdoor enthusiast. Arne was a gregarious, lively presence, whose love for life was evident. He enjoyed the simple things - good groceries, cold beer, and great conversation. He and Shirley spent much of their time at the cabin in Brimson Minnesota, with their children and grandchildren. With saunas, feasts of Shirley's home-cooked meals and trips to Hugo's, Arne and Shirley set the standard for good Minnesota living. Arne offered a great deal of his time to others. An Eagle Scout as a young man, Arne served as an adult Scout leader for many years, was an active Kiwanis member and was a pillar at Christ Lutheran Church in Duluth, where he served as both Treasurer and President. Arne loved the outdoors and was a constant fixture on hunting and fishing trips, frequently joining his son Karl for the latest "trip of a lifetime" hunting moose or fishing in Canada. He also enjoyed golf, cross-country skiing, curling, bridge and cribbage. In life, his booming voice and hearty laugh could stand out in an auditorium, but his soft-spoken ruminations on life, history and the ways of the world would have people hanging on his every word. He was known for his "Arne-isms", bits of wisdom that were so simple yet so profound. His gentle kindness, sense of humor and modest nature endeared him to everyone he met. That he was loved by so many will always be his greatest legacy. He was greeted in heaven by his parents and brothers Eric, Swen, Berger and Marvin. He is survived by Shirley, his wife of 64 years; his children and their spouses, Kristine (Jack) Curtis, Jan (Bruce) Larson, Karl (Mollie) Erickson; his five grandchildren, Eric and his wife Anna Larson, Wade Larson, Keely Curtis, Rosa and Tressa Erickson; and many nieces and nephews. The family would like to thank the amazing staff at Primrose and Essentia Health Hospice for the loving care they gave Arne in his final days. Visitation will be from 5 to 7 p.m. Monday, August 26, 2013 in Williams Lobermeier Boettcher Funeral Home and will continue from 10 until the 11 a.m. funeral service Tuesday in Christ Lutheran Church. 2415 Ensign St. Pastor Michael Main officiating. Burial in Park Hill Cemetery. Memorials to Christ Lutheran Church would be appreciated.

To send flowers to the family in memory of Arne Erickson, please visit our flower store.