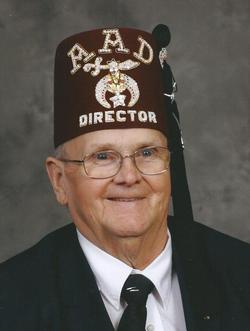 Arnold C. "Arne" Johnson, age 78, Duluth, died October 4, 2014 at St. Luke's Hospital. He was born in Duluth on September 12, 1936 to Melvin and Beatrice Johnson. He had attended Longfellow Elementary School, West Junior High and graduated from Denfeld High School. He later earned his AA Degree from UMD. In high school Arne loved playing football and participated in both football and track. He loved to sing and was active in the acapella choir. He lived in Duluth all his life, from Huntington St. in West Duluth to East Hillside and Duluth Heights. Arne joined the Euclid Masonic Lodge and worked tirelessly as it's recorder and twice as Master of the Lodge. As part of the Masonic Order he was a member of the Scottish Rite and Shrine. In his early years with the Shrine he was a member of it's music group, the Chanters. In all three organizations he spent over fifty years as a loyal servant. The last few years he spent more time working with the Aad Shrine in Duluth. He spent two years as the office manager and was very active in one of the sub groups called the "Directors Staff." As a member of that group he had the honor to be it's representative to the potentate. Arne was not afraid of work and while in high school he worked in the family business called the Grand Bakery. While in college he worked for Tastee Bread in the West End. He finally joined the serious work force working for the city. He always bragged that the thing than got him the job was he knew how to type. The problem was it was a temporary job. He then moved into traffic violations collecting parking ticket fines. As he moved around in the court system he made his way up with the guidance of Joe Laski who eventually appointed him as Chief Deputy of County Court. Arne retired from this position after many good years working with the judges and Staff in the Court House. In his volunteer work he worked with the Riverview Methodist Church Boy Scout Troop for many years. He has been a member of the Oneota Cemetery Board for over twenty years. He also spent many years working on what was called the city's Alcohol and Beverage Board, which has since changed its name. Arne was preceded in death by his parents and brother Neil. He is survived by his brother Dennis, of Duluth, one aunt and several cousins. Visitation Friday 5-7PM with Masonic Service 6:30PM, all at Williams-Lobermeier-Boettcher Funeral Home. Visitation continues from 10AM until the 11AM Funeral Service Saturday at the Shrine, 5152 Miller Trunk Highway. Burial at Oneota Cemetery.

To send flowers to the family in memory of Arnold Johnson, please visit our flower store.