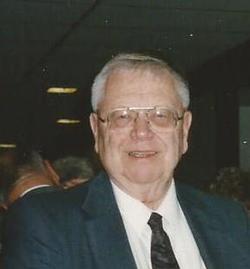 Arnold W. Larson, 87, died May 25, 2015 at the Minnesota Veterans' Home in Silver Bay, MN. Arnie was born September 14, 1927 to Arnold G. and Ruth Larson in Albert Lea, MN. He grew up in Albert Lea and was active in sports. He attended St. Olaf College and left to serve in World War II. Afterwards, he attended the University of Minnesota and graduated from its law school. In 1953, he came to Duluth where he practiced law until his retirement. In his later years of practicing, he was part of the Volunteer Attorney Program, and one year he was named Volunteer Attorney of the year. Arnie was a member of the Minnesota State Bar Association for over 50 years. In 1960, he and Elizabeth Templeton married. Arnie was active at First Lutheran Church where he was a past president and a member of several boards. He enjoyed curling, golf, tennis and was a member of Kiwanis. He and Elizabeth celebrated with their "New Year's Group" for over 50 years. The family would like to thank Dr. David Sproat, his assistant Jodi, and the entire staff at the Veterans Home of Silver Bay, all of whom provided excellent care. Arnie was preceded in death by his parents. He is survived by his loving wife of 54 years, Elizabeth; his daughters, Ruth Larson of Duluth; Martha Larson and husband James "Bud" Schaefer and granddaughter, Emily, of Minong, WI; brother-in-law, Dr. Arch Templeton of Aiken, SC, and two cousins, Susan Bell, of PA, and Sally Chappel of MO. Visitation 10 am until the 11 am Memorial Service, Thursday, June 4, 2015 at First Lutheran Church, 1100 E. Superior Street, Duluth, MN. Burial at Forest Hill Cemetery with Military Honors accorded by the Duluth Combined Honor Guard. In lieu of flowers, memorials would be appreciated for "Time for Renewal" at First Lutheran Church. To sign the guestbook on line, visit www.wlbfuneralhome.com. Williams Lobermeier Boettcher Funeral Home is entrusted with final care.

To send flowers to the family in memory of Arnold Larson, please visit our flower store.