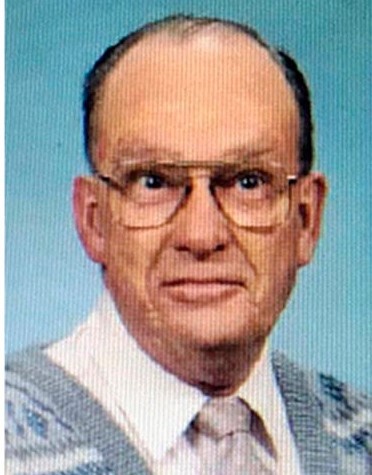 Arthur H. "Art" Johnson, 94, a lifelong West Duluth resident, passed away peacefully at Chris Jensen Health & Rehab Center on February 17, 2019, just 9 days before turning 95. He was born February 26, 1924 to Jennie & Hugo Johnson. He graduated from Denfeld High School January 1943. He then entered the US Army and served as Private 1st Class until March 1946 & is a World War II Veteran. Upon returning to Duluth he met the love of his life, Alice "Tiny" Day, and they married July 2, 1949. They had two daughters to complete their family. Art worked for the City of Duluth Water, Gas & Sewer Division for 31 years as Senior Operator of Lift Stations retiring in 1979. He was a lifetime member of Elim Lutheran Church where he had been a Sunday school teacher, youth Choir Director, choir member & soloist for 70 years. He took four years of voice training at UMD. He sang with the former male chorus "Duluth Northern Aires," and was a soloist in many area churches, weddings & funerals over his years. He was accomplished at playing the piano & organ. His love of music also brought him to the dance floor where he & Tiny would out-dance everyone with their polished Jitterbug. Big band music was their favorite! Art was the Flagman for the Tri-State Stock Car Racing Association at the Superior Speedway for 27 years & was inducted into their Hall of Fame in 2005. He was also the Flagman at the Proctor Speedway for many years. He was a member of the West Duluth American Legion Post 71. He was very proud to serve as the Post Commander and went on to be 8th District Commander of MN American Legion. Art met many people and made many friends during his long life. He will be remembered for his big heart and genuine love of life. He was preceded in death by his parents; wife, Tiny; brother, George; son-in-law, Jim Bertram; grandsons, Chad Liebaert and Forrest Johnson. Art is survived by his daughters, Sheri (Dave) Hom of Duluth and San Tan Valley, AZ and Lori (Kevin) Betram-Cebulskie of Orange Park, FL; granddaughters, Cara (Dave) Klawiter of AZ and Kirsten Bertram; great grandson, Bentley Bertram of FL; brother-in-law, Bob (Darlene) Day of Duluth; many nieces, nephews and friends. Visitation 11am until the 12 noon funeral service, Saturday, May 11, 2019 at Elim Lutheran Church, 6101 Cody Street, Duluth. Pastor Jim Hagen officiating. Full military honors accorded by the Duluth Honor Guard. Burial at Oneota Cemetery. In lieu of flowers, the family requests memorials to Elim Lutheran Church in Art's name. Arrangements by Williams Lobermeier Boettcher Funeral Home.

To send flowers to the family in memory of Arthur Johnson, please visit our flower store.