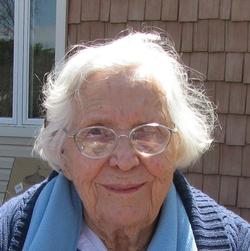 Aune Signe (Maki) Gustafson, 102, formerly of West Owatonna Street in Duluth, died January 16th at the Rennes Center in Rhinelander, Wisconsin. She was born on August 23, 1911 in a log cabin in Oulu, Wisconsin to Gust and Hilda Maki, Finnish immigrants who had met along Duluth's St. Croix Avenue. They married in 1910, and shortly thereafter settled on their own proud 40 acres of recent cutover land in Oulu where they raised their small family. Aune's vivid childhood memories included the Great Flu Epidemic of 1918; the ominous smoke clouds of the Cloquet Fire of 1918, and riding in her parent's first car, a used Model T, in 1920. She and her brother Reino learned as young children to dance at the Oulu Finn Hall and she continued to love dancing into her 80s. Aune graduated from the eighth grade at the Washington School in Oulu. Her early desire was to become a teacher, but she was not encouraged to continue her education at that time. She completed her high school English courses by attending night school in the 1950s. In 1928 she went by train from Iron River to Duluth where she worked for many years as a maid for the Huey family during the winter months, returning to the "organic, off grid" family farm in Oulu during the summers. In the summer of 1934 while visiting the Chicago World's Fair, she was in the crowd in front of the Biograph Theater the evening John Dillinger was gunned down by the FBI. While contemplating a move to Minneapolis, in July of 1936 she attended a dance held at the Duluth Amphitheater and met Rudy Gustafson. They were married a month later on August 22 and remained so until Rudy's death in 2002. Aune was a homemaker, an old-fashioned cook, a mother, a grandmother, a great grandmother, and a dear friend to many. During her marriage she live in homes in the Homecroft neighborhood, on Avondale Street, near 21st Avenue East, at 10th Avenue West, and finally on Owatonna Street. Mother of five boys who could do no wrong, her homes were always friendly hubs for drop-in gatherings and hospitality. Her blueberry pies were a source of inspiration to all. Her true life partnership with her husband Rudy involved supporting his entrepreneurial ventures as a bread truck driver, a plumber, an excavating contractor, and a heavy equipment dealer as well as his three candidacies for governor of Minnesota on the Socialist Labor Party ticket. She identified with the working class, and was a proud member of the SLP for over 70 years, perhaps their longest and oldest member. The SLP was central to their worldview and a source of sustaining community. Aune particularly loved their cabin on Jackman Lake near Iron River, Wisconsin and the opportunities it afforded her to maintain her Finn heritage, to take saunas and skinny dip, to listen to Whip-poor-wills, to enjoy the bounty of blueberries, and to revel in the company of her family and friends. In their later years, Aune and Rudy spent parts of many winters in Florida, enjoyed trips to Finland and Sweden, and shared their raspberry patch with those who dropped by. After Rudy's death she continued to live on Owatonna Street until her move to Wisconsin in 2007 to be near her son Bill and daughter-in-law Gloria. She moved to the Rennes Center in June of 2013, maintaining her clear mind and opinions until the very end. She was preceded in death by parents Gust and Hilda, brother Reino, sons Dennis and Daniel, and her husband Rudy. She is survived by sons Donald (Sharon) of Oulu, WI; John (Karen) of Knife River MN; and Bill (Gloria) of Rhinelander WI; Daniel's widow Mary Jo (Ron) of Toledo OH; grandchildren Margaret, Sue Ellen, Jeff, Rob, Derrick, Mercedes, Chris, Sarah, Bob, Angie, and Shanna; and many great grand children. Aune loved them all. CELEBRATION OF LIFE: 3:30 p.m. Saturday June 21, at the Jackman Lake family cabin near Iron River Wis., north approximately two miles on Fire Lake Rd to No. 70240. FMI contact Don and Sharon at 218-390-4778 (Iron River Wis.), John and Karen at 218-834-3582 (Knife River Minn.), Bill and Gloria at 715-282-7975 (Rhinelander Wis) Inurnment will be at Lakeview Cemetery, Palmers MN. If you can't attend her life celebration, please think of her when you next find yourself in that special blueberry patch that you love. Arrangements by Hildebrand Russ Funeral Home in Rhinelander WI and Williams Lobermeier Boettcher Funeral Home in Duluth MN.

To order memorial trees or send flowers to the family in memory of Aune Gustafson, please visit our flower store.