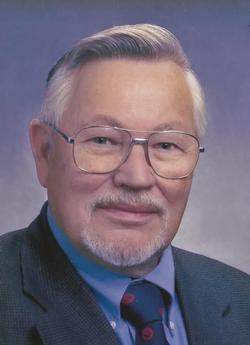 Basil D. Norton of Grand Avenue, died Monday, October 5, 2015 at Benedictine Health Center. Basil was born March 29, 1932, in Grand Rapids, Michigan, to Claude Clark and Julia Lucille (Kane) Norton. He spent most of his life in Duluth, Minnesota. Basil was a Korean War Veteran, serving from 1951 to 1955. He was honorably discharged from the United States Navy. He was a 1951 graduate of Creston High School in Grand Rapids, Michigan and a 1958 graduate of Grand Rapids Junior College. He received a Bachelor of Science degree in Zoology from Michigan State University in 1961. He met his loving wife Ruthanne Carol Miller in 1958 at Grand Rapids Junior College and they married August 20, 1960 in the Catholic Chapel on the grounds of the Michigan State Veterans Facility. Basil and his wife moved to Chicago, Illinois where he started his career at Lincoln Park Zoological Gardens under the directorship of R. Marlin Perkins. He rose from Zoologist to General Curator within five years. He came to Duluth in 1967 as the Director of the Lake Superior Zoo. He was the first professional director of the zoo, covering a span of 27 1/2 years, making his service a total of 34 years in zoo management. Many will remember his weekly trips as a guest on the television program Mr. Toot. The Duluth Zoo Master Plan was the first of his achievements. He also obtained the first zoo accreditation for this northern region and he, along with others, presented the first Regional Zoo Conference in Duluth of the American Zoo and Aquarium Association (AZA). During his tenure, he oversaw the implementation of the second "New Zoo Plan", involving the Snow Leopard Exhibit, Polar Shores, the Australian Connection, the North American and Asian Exhibits as well as a new Tiger Habitat. Zoo Central, formerly called the "Main Building" was revitalized. The total cost of these projects was over nine million dollars. He retired in October 1994 after a most rewarding career. Upon retirement the Lake Superior Zoological Society made him a life member. Basil was also a member of the American Zoo and Aquarium Association. He was not one to sit around and take it easy or travel so he looked and found a place to put some of his talents to use by volunteering at the Great Lakes Aquarium. His greatest pleasure was with the people who worked there, as well as with the many visitors who came to this center of learning. He was a former member of Holy Cross Catholic Church, Good Shepherd Catholic Church where he served on the Liturgy Committee for 6 years and as an adult altar server; St. Elizabeth Catholic Church, and St. James Catholic Church. Basil loved taking care of his grandchildren, working in the garden, reading, the Lake Superior Zoological Board, and his favorite group, the Lake Superior Zoo Docents, who dedicated a room in his name, ensuring that in the future, more precious books and educational equipment would keep the zoo abreast of all the newest zoo techniques along with the latest life histories of animals in the wild as well as in other zoos. What was very important to him was the education of others and what could be done to preserve endangered species and their habitats. He was preceded in death by his parents, Claude and Julia Norton, his brother Richard Norton, and his loving wife of 54 years Ruthanne. He is survived by his children Todd and Kayoko Norton of Pomona, California; Amy and Loren Mustache, Duluth and Greg Norton, Duluth. Grandchildren; Toni, Emily, Tasia, Christa, Breanna and Jolie-Sage. Great-Grandchildren, Aydan, Charlotte and Kylie. Honorary children; Jill (Scott) Markee, Jacci Eder, and Tamara Melcher. Honorary grandchild, Matthew. Visitation will be from 12 noon until the 1 p.m. Mass of Christian Burial Friday, October 9, 2015 at St Elizabeth Catholic Church. 610 99th Ave West. Rev Fr James Bissonette officiating. Burial in Oneota Cemetery. Please consider memorials to The Nature Conservancy, 394 South Lake Ave, Suite 308, Duluth MN 55802. To sign the guest book on-line, visit www.wlbfuneralhome.com. Williams Lobermeier Boettcher Funeral Home is entrusted with final care.

To send flowers to the family in memory of Basil Norton, please visit our flower store.