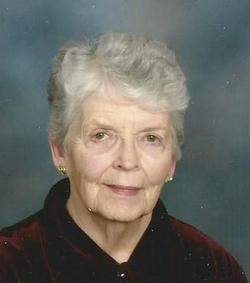 Bette Sabot (Bergstedt, Pinney) Salmonson, age 90, met her Lord on April 28, 2014. She was born July 4th, 1923 in rural Bismarck, North Dakota. Her maternal grandparents, Katern Helena Westen Skoglund and Anders Olaf Skoglund were born in Northern Sweden and emmigrated to the USA in 1891, settling first in Braham, Minnesota, then moved to Bismarck, ND. Her paternal grandparents, Frederic Francois Chabot and Celestine Philomena Blanc Chabot, along with their daughter Rosa, were born in France. They embarked on the journey for a new life in the USA in 1886, settling in Bismarck, North Dakota. Their children, Frederick Frank Sabot and Elvira Skoglund, met and married there, and had 8 children. They moved to Duluth when Bette was 2 years old.

Bette is preceeded in death by her three husbands, Carl A. (Bud) Bergstedt (1951), Edward J. Pinney (1975) and Elmer E. Salmonson (2004). She was the last survivor of her eight siblings, Fred, Kenneth, Richard and Donald Sabot; Verna Busselle, Leila Schnorr, and her best friend and little sister Annette DeGrio as well as a granddaughter, Sherry Anderson.

She attended Duluth Schools (Oneota, West Jr., Denfeld) as well as receiving a degree at 60 from St. Scholastica in Gerontology. She was a life-long active member of Bethany Baptist Church, loved singing in the choir, president of Cradle Roll and women’s circles. During WWII, she worked in the old Coolerator Plant, and later as a bookkeeper at Fullerton Lumber Company. Later in life she served as a volunteer for 20 years in St. Luke’s Gift Shop as well as volunteering as an advocate for the elderly in nursing homes.

She loved to walk, and was the family’s historian with photographs, eventually creating albums for each child and grandchild. She loved needlepoint and most of all loved being a Mom and Grandma. From a journal entry she wrote “as busy as I was I wouldn’t trade for any different life”.

Words cannot adequately express the family’s deep appreciation and gratitude for the dedicated, compassionate, hard working and capable people who cared for her the last 2 1/2 years of her life at Franciscan Health Center, Duluth.

Visitation will be from 2 p.m. until the 2:30 p.m. funeral service Sunday, May 4, 2014 at Bethany Baptist Church, 6700 Grand Avenue, Duluth, MN, with reception following in church social hall. Memorials to Bethany Baptist Church would be appreciated. Burial in Oneota Cemetery. Arrangements by Williams Lobermeier Boettcher Funeral Home.

To send flowers to the family in memory of Bette Salmonson, please visit our flower store.