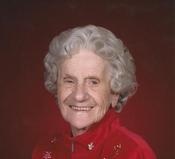 Betty was known for her cooking and baking and catered for over 20 years serving delicious meals at hundreds of weddings and banquets. After retiring, she worked at Denfeld Super Valu in the bakery and deli and later in the linen department at Glass Block.

She was a member of The Lutheran Church of the Holy Trinity for 64 years and was previously active in the Rebecca Circle, XYZ Club and West Duluth Women's Club.

She loved to dance with Walt. Plus she taught her children how to cook and make great sandwich loaves. The kids loved her Swedish meatballs, Swedish pancakes, and the great Sunday dinners after Church. She even taught her Granddaughter Carrie to make hardtack to continue that tradition.

The family wishes to thank the staff at Edgewood for their tender care.

Visitation 1PM until the 2PM Memorial Service on Saturday, March 2 in the Lutheran Church of the Holy Trinity with inurnment at Bethany Cemetery in the spring. In lieu of flowers, memorials are preferred to the family for her church. Arrangements by Williams Lobermeier Boettcher Funeral Home.

To send flowers to the family in memory of Betty Bjorklund, please visit our flower store.