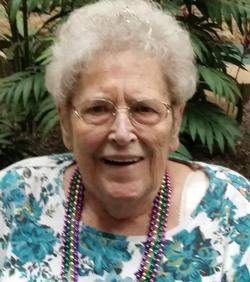 Betty Ann Christiansen, 84, formerly of Railview Apartments, died Tuesday, September 15, 2015 at Viewcrest Health Center. She was born in Duluth on January 8, 1931 to Clarence and Anna Rolfson. Betty was a 1949 graduate of Central High School and worked at Western Union for 20 years and A T & T for 23 years, retiring in the mid 1990's where she was in Directory Assistance. She enjoyed playing cards, Bingo, the casino's, watching sports and spending time at the cabin on Whiteface. She was a member of the American Legion Auxiliary and the Proctor Moose. She was preceded in death by her parents, two sisters, Lois Tahtinen and Marilyn Arnt; her husband, Martin in 1978 and a son, Bruce in 1990. She is survived by her daughters, Robin (Wayne) Pedersen of Duluth and Terri (Joseph) Wallin of Cotton MN; a son, Martin (Kim) of Duluth; grandchildren, Shane, Jason and Brian (Amy) Pedersen; Eric (Melissa) Burleigh, Jason (Debbie) Wallin and Jeremy (Heather) Wallin; Martin and Alina Christiansen; Brandon Christiansen (Suzanne Cooke) and Matthew Christiansen (Stephanie Severin); five great-grandchildren; a daughter-in-law, Sheryl Christiansen of Duluth. Visitation will be from 10 until the 11 a.m. funeral service Saturday, September 19, 2015 at Williams Lobermeier Boettcher Funeral Home. Chaplain Craig Carlson officiating. Burial in Sunrise Cemetery. Memorials to Viewcrest Activities Department would be appreciated. To sign the guestbook on-line, visit www.wlbfuneralhome.com. Williams Lobermeier Boettcher Funeral Home is entrusted with final care.

To send flowers to the family in memory of Betty Christiansen, please visit our flower store.