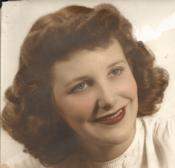 Betty Lou Grams, 85, most recently of Viewcrest Health Center, passed away Thursday, November 8, 2012. Betty was born in Duluth on July 23, 1927 to Louis and Myrtle (Anderson) Fortin. She grew up in Duluth's West End, attending Bryant, Lincoln and Denfeld, graduating in 1944. Betty worked at the News Tribune until her marriage to Ernie Grams in 1947. After raising her family, she worked for several years at the Glass Block Department Store. Betty was a member of Faith Lutheran Church in Lakeside. She was preceded in death by her husband, Ernie; son, Michael, brothers, Donald and James Fortin and special friend, John McClain. She is survived by her sons, Stephen (Carol) and Jeffrey (Mary Jo) both of Duluth; a grandson, Benjamin of Zhuhai, China; a sister-in-law, Thelma Fortin of Grand Rapids, Minn. If everyone could have parents like Betty and Ernie, the world would be a better place. The family would like to thank the staff at Viewcrest Health Center for the heartfelt care of Betty for the last three years. Visitation will be from 2:30 p.m. until the 3 p.m. memorial service Saturday, November 10, 2012 in Williams Lobermeier Boettcher Funeral Home. Burial in Park Hill Cemetery. To sign the guestbook on-line, visit www.wlbfuneralhome.com.

To send flowers to the family in memory of Betty Grams, please visit our flower store.