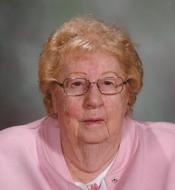 Betty L. Hanson, 88, Duluth, died October 10, 2012 at Viewcrest Health Center. She was born in Duluth on September 27, 1924 to Robert and Isabella Childs. Betty was a graduate of Duluth Central High School and the Young and Hursch Business School. She married Irvin E. Hanson in Duluth on June 2, 1945. Betty began her career with Western Union delivering telegrams by bicycle and later worked in office. She was a member of First Presbyterian Church and member of the former Highland Presbyterian Church. Betty was preceded in death by her parents, husband, son-in-law Charles Kniep, sister Ida Kreager and brothers Max, Archie, Joe, George, Paul, Dick and Fred. She is survived by her daughter Carol Kniep, Duluth, son Gerry Hanson, Duluth, grandchildren Eric Hanson and Crystal Hanson, great-grandchildren Johnny and Faith and many nieces and nephews. Betty's family would like to thank Dr. Craig Anderson, Nurse Practioner Margaret Holberg and the staff at Viewcrest, especially her "Hawk Ridge Familly". Visitation 10AM until the 11AM funeral service Saturday at Williams-Lobermeier-Boettcher Funeral Home. Entombment at Sunrise Cemetery.

To send flowers to the family in memory of Betty Hanson, please visit our flower store.