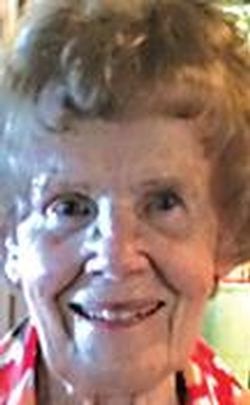 Betty Lois (Stenback) Opien, 92, formally of Duluth, passed away peacefully on July 20th, 2016, in Maplewood, Minnesota surrounded by her family. Born in Duluth in 1924, "Betts" as her brothers sometimes called her, was known for her great kindness and helpfulness to others. Betty graduated from Denfeld High School in 1942, and worked at various jobs during and after WWII, culminating with a civilian government job at a recruiting office in San Francisco, then as a telephone operator at Northwestern Bell after returning to her hometown. She married her high school sweetheart Roy in 1946, and became a stay-at-home mother to five children in addition to the numerous children Betty and husband Roy fostered. Betty enjoyed all children especially her grandchildren and great-grandchildren who were very dear to her. She was well known for her homemade goodies, especially her crescent rolls and chocolate cake. Betty is preceded in death by her loving husband Roy and ten brothers and sisters. She is survived by children Patricia (John) Mills, Paula (Doug) Palmer, Carolyn (Keith) Johnson, Bill (Marcia) Opien and Jerry Opien. In addition Betty is survived by seven grandchildren and 9+ great grandchildren. We will all miss Betty and ask that all show kindness towards others as she always did. Visitation 10 until the 11 a.m. funeral service Tuesday, July 26, 2016 at Emmanuel Baptist Church, 1505 Eklund Ave. Pastor David Mork officiating.

To send flowers to the family in memory of Betty Opien, please visit our flower store.