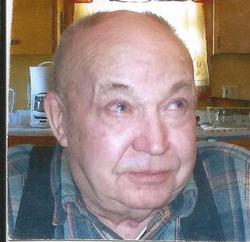 Charles Rodden "Rod" Broman, 82, of Tondryk Road, Saginaw, passed away peacefully Thursday, March 20, 2014 in his home. He was born on October 4, 1931 in Duluth to George and Lois Broman. Rod attended Central High School and served in the U.S. Army during the Korean War. Rod married Karen Smith on August 2, 1957 in Duluth. He retired from A. G. O'Brien where he worked as a plumber and steamfitter. He was a longtime member of Gethsemane Covenant Church, serving on various boards. Rod was a much loved husband, father, grandfather and great-grandfather, he had a great sense of humor. He was preceded in death by his parents; a son, Craig; a sister, Georgann Sponnick. Rod is survived by his wife, Karen; daughters, Sheryl (Todd) Bakke, Lauri (Don) Magdzas, Audrey (Doug) Johnson, Jane Glaccum (fiancee, Scott Miller) and Judy (Steve) Fox; a brother, Ken (Mary) Broman; a brother-in-law, George Sponnick; 18 grandchildren and almost 11 great-grandchildren; many nieces and nephews.

To send flowers to the family in memory of Charles Broman, please visit our flower store.