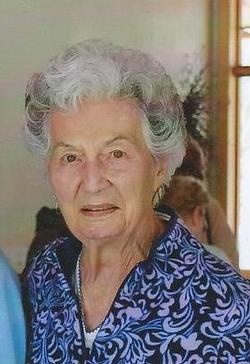 Charlotte L. Cherro, 87, of Duluth, died Saturday, March 22, 2014 in her residence surrounded by her family. She was born in August of 1926 to Clifford and Viola (Craven) Hoban in Duluth. She attended Duluth Public Schools and was a graduate of the Old Central High School in 1945. Charlotte married the love of her life, Joseph Cherro on August 12, 1946. Her work included jobs at the Norshore Theatre as a cashier when it first opened. She then worked at the First Street Department Store in sales. Charlotte later worked for the Catholic Diocese of Duluth as a receptionist. She worked with four different Bishops; Bishop Schenk, Anderson, Brom and Schwietz. Charlotte retired after 20 plus years for which she received a Papal Blessing Certificate from Pope John Paul II for her 20 years of service at the Catholic Chancery. Charlotte enjoyed golfing, bowling, gardening, crafts and was the best cook. But her most beloved job was caring for her family to insure they always were taken care of. She was a charter member of St. Lawrence Catholic Church. She belonged to the O.K. Club and served on the Pastoral Council for two years. Charlotte was instrumental in forming the St. Lawrence funeral committee. She was a member of Viewcrest and Benedictine Auxiliaries and the former Piedmont Homemakers Club. She was preceded in death by her parents; a sister, Mary Burns; brothers, John and Patrick Hoban. Charlotte is survived by her husband of over 67 1/2 years, Joe; her daughters, Barbara (Pete) Amys, Leanne (Larry) Berg and Julie (Graydon Amundson) Cherro; six grandchildren and seven great-grandchildren; sister-in-laws, Marlene and Eunice Hoban and many nieces and nephews. Visitation 5 to 7 p.m. Friday in Williams Lobermeier Boettcher Funeral Home with Rosary Prayers at 6:30 p.m. Visitation will continue from 10 until the 11 a.m. Mass of Christian Burial Saturday, March 29, 2014 in St. Lawrence Catholic Church. Fr William Fider officiating. Burial in Calvary Cemetery. To sign the on-line guestbook, visit www.wlbfuneralhome.com.

To send flowers to the family in memory of Charlotte Cherro, please visit our flower store.