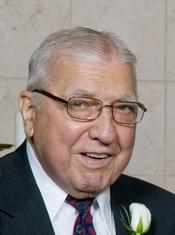 Chester T. "Chet" Luczak, 85, of Duluth, died peacefully on August 21, 2013 in St. Luke's Hospice. Chet was born on March 13, 1928 to Anthony and Agnes (LaBuda) Luczak. He graduated from Cathedral High School where he excelled in Football and Track and Field. He went on to attend Duluth Junior College where he continued to play football and competed in the Junior Rose Bowl in Pasadena California in 1948. Chet served in the Korean Conflict. He was an Infantryman in the 31st Infantry Regiment (the "Polar Bears") and assigned to the 7th Infantry Division. On August 28, 1954 Chet married Helen Ruby. He attended St. Lawrence Parish where he was an active member, serving as the first Church Council President, was a member of the Knights of Columbus 6783 and a past Grand Knight, and also served as an usher. Chet retired from Prudential Insurance in 1991. He was a member of the V.F.W. Post 137 and Lake Avenue Loafers. Chet always enjoyed hearing a humorous story and also telling those of his own. He loved spending time at his cabin on West Bass Lake near Cotton Minnesota which he had for 60 years. Chet was a man firm in his faith and exemplified the utmost of character. He was a wonderful husband, father, grandfather, great-grandfather and brother and will forever stay in our hearts and minds. He is preceded in death by his parents, brother Leonard, stepmother Stella, and stepbrothers Don and Tom Erickson. He is survived by his wife of 58 years Helen; sons Timothy (Patsy), Anthony (Julie),Thomas (Carol); daughter Mari (Rudy) Monson; sisters Lucille Zimbeck, Bernice Zelazny, Patricia (Don) Parzych, Marie Luczak, Phyllis Peterson, Geraldine (Cal) Bohren, Audrey (Jerry) Michelizzi, Margie Thoreson; grandchildren Anthony (Betsy), Tara (Bryan), Tina, Matthew, Eric, Sara, Amy, Ryan, Reed, Emily, Jack; great-grandchildren Corinne, Colette, Kellen and one sibling on the way, and Skyler. Visitation 10AM until the 11AM Mass of Christian Burial Monday at St. Lawrence Catholic Church, 2410 Morris Thomas Road, Duluth. Inurnment Oneota Cemetery. Military honors accorded by the Combined Duluth Honor Guard.

To send flowers to the family in memory of Chester Luczak, please visit our flower store.