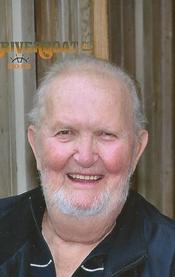 Daniel R. "Dan" Nilsen, 76, of Hermantown died Wednesday, August 28, 2013 in the Solvay Hospice House surrounded by his loving family following his battle with cancer. He was born on December 11, 1936 to Egel and Signe Nilsen in Duluth. Dan married Patricia Wiskerchen on August 17, 1957 in Duluth. Dan was a lineman in both Duluth and Proctor, MN, and retired as a partner with Minnkota Electrical Sales. He was a member of Our Savior's Lutheran Church and was past president of the church council as well a supporter of many youth activities. Dan also enjoyed hunting and fishing with his sons and golfing with friends. He was involved with youth hockey as a coach and referee and was the penalty box keeper at the Proctor Arena for the past several years. He was an avid UMD hockey fan and was a former member of the Blue Line Club. Dan and Pat enjoyed traveling and spending their winters in Arizona. He was preceded in death by his parents, a brother, Bruce, a sister, Sarajane Klingberg and his mother and father in-law, Otto and Genevieve Wiskerchen. Dan is survived by his loving wife of 56 years, Pat; children, Pamela (Glen) Merrier of Proctor, Bruce (Susan) of Austin MN, Lori Fride of Hibbing, Daniel T. (Sheri) of Pike Lake and Genevieve (Jason) Kappel of Rosemount, MN; sisters, Karen Dormanen of Cloquet and Claudia Mlodozyniec of Duluth; a brother, Fred (Dawn) of Duluth; grandchildren, Joshua, Derek, Patrick, Danielle, Andrea, Zachary, Michelle, Tara, Haley, Jake, Nils and Amelia; great-grandchildren, Brayley, Isabella, Parker, Signe, Jaxon, Ciri, Ari and Myla; many nieces, nephews, extended family and close friends. Visitation will be from 5 to 7 p.m. Monday, Sept 2, 2013 in Williams Lobermeier Boettcher Funeral Home and continues from 10 until the 11 a.m. funeral service Tuesday in Our Savior's Lutheran Church. 4831 Grand Ave. Pastor Christine Anttila officiating. The family prefers memorials to donor's choice.

To send flowers to the family in memory of Daniel Nilsen, please visit our flower store.