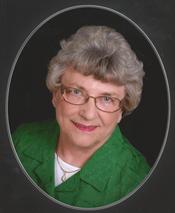 Dolores Fern (Berg) Honer passed away on Sunday, October 6, 2013, surrounded by her loving family. After a year-long and courageous battle against cancer, she peacefully and quietly joined her family in heaven while being tended to by the caring staff at Solvay Hospice House. Known to most as Dody, she was born on April 10, 1934, raised in Lakewood Township and was a lifelong resident of the Duluth/Superior community. Married for 41 years, Dody was preceded in death by her husband Frederick J. Honer in 1996, her father Harry M. Berg and mother Fern Berg. Notwithstanding her initial employment with 1st National Bank, Duluth, she worked most of her life directly supporting the business ventures of Fred. Alongside her husband, she helped run East End Garbage and helped build one of Duluth's most prominent and locally owned garbage service businesses called Zenith/Kremer Disposal. Together with Fred she would raise two sons and one daughter. Dody was an avid collector of restored antiques and handmade crafts. She also enjoyed traveling, reading and playing her organ. She was an avid fan and supporter of UMD Bulldog and UWS Yellowjacket hockey programs and cherished every minute she had with her eight grandchildren. A most loving and humble human being, Dody will be sadly missed by all who knew her. She is survived by sons Mark (Julie) and their children Jenna & Jayson, Scott (Annette) and their children Keith, Kurt and Kole, daughter Diane Stauber (James) and their children Malaree, Derek and Emma. She also leaves behind four great grandchildren. The family would like to give a special thanks to Dr. Goueli and his staff, Dr. Plachta and Lisa, St. Luke's Hospice and Solvay Hospice House for all the tender loving care they showed to our mother and family. Visitation 5 to 7 p.m. Wednesday, October 9, 2013 in the Williams Lobermeier Boettcher Funeral Home and will continue from 10 until the 11 a.m. funeral service Thursday in Christ Lutheran Church. 2415 Ensign St. Pastor Michael Main officiating. Burial in Park Hill Cemetery. In lieu of flowers, memorials to 2nd Harvest Northern Lakes Food Bank, 4503 Airpark Blvd, Duluth MN 55811 or the Union Gospel Mission would be appreciated.

To order memorial trees or send flowers to the family in memory of Dolores Honer, please visit our flower store.