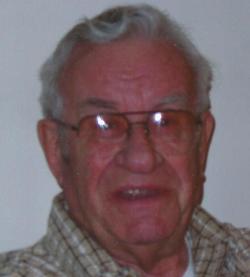 Donald F. Rossley, 90, formerly of North Central Ave and Faith Haven Apartments, died Wednesday, April 20, 2016 at St Eligius. Don was born April 16, 1926 in Duluth to Christ and Olive (Swanson) Rossley. He was a lifelong Duluth resident and a 1945 graduate of Denfeld High School. Don served in the Navy on the USS Suwannee aircraft carrier during World War II. He was employed by the Mesabi, Great Northern and Soo Lines Railroads for a combined total of 14 years. He was a 27 year employee of Bell Brothers Funeral Home until retiring in 1990. Don was a member of the American Legion Post 71 and V.F.W. Post 137. He was preceded in death by his parents; first wife, Mary in 1979 and second wife, Melba in 1997; twin brother, Robert L. Rossley and brother, Clyde Rossley. He is survived by a daughter, Patricia (William) Beckwell of Gilbert; a son, David (Lucinda) of Bloomington, MN; two grandchildren, Matthew Beckwell and Mary (John) Hall II; great-granddaughter, Nora Hall; a sister-in-law, Florence "Sis" Rossley; nieces, nephews and a special friend, Evelyn Soder. The family would like to thank St. Eligius for the wonderful care they provided in Don's final months. Visitation 10 until the 11 a.m. funeral service Tuesday, April 26, 2016 in Williams Lobermeier Boettcher Funeral Home. Burial at Oneota Cemetery with Military Honors accorded by the Duluth Honor Guard.

To order memorial trees or send flowers to the family in memory of Donald Rossley, please visit our flower store.