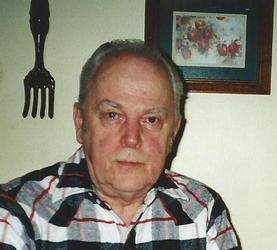 Donald Edward Saarela joined his wife, Joyce, and their Savior in Heaven on January 25, 2016. He was born on February 23, 1929 to Matt and Jennie Saarela. Don's early years were spent in Eagle Lake Minnesota. Because the Finnish language was spoken exclusively at home, Don learned English from the other children at school. He often recalled the simple life near his grandparents farm in Kettle River and how much had changed from then until now. Don enlisted with the US Army in 1946. Once he was discharged, he began working at the US Steel plant in Morgan Park. He talked about working his way from cleaning waste boilers and laying track to becoming a stationary engineer operating high pressure steam boilers. He loved his job and would have stayed until the plant closed down but a nearly fatal heart attack put him on disability. During this heart attack, Don had a near death experience and traveled to heaven, seeing colors, hearing music and seeing a light which he desperately wanted to enter. He was resuscitated but told his experience to many people because he wanted everyone to know that Heaven exists and death holds no fear. He was a man of few words but felt it was his mission to communicate this hope to others. Don married Joyce Renne on September 22, 1951. They had a stillborn son, Donald Edward Jr., a daughter, Gail, and son, Steven. Don was a member of Hermantown Community Church and especially liked meeting with their Recycled Teens group. Special friends, Jerry and Janet Eklund, were faithfully there for Don as his health and eyesight failed, being certain he could get to church functions. Don was preceded in death by his father and mother and one son, as well as his sisters, Lorraine Vessels, Lila Saarela, Nancy Saarela and Kathy Shonk. He is survived by his daughter Gail (Marvin Pirila) Francette, son Steven (Jayne) Saarela, sister Geri Frye, and brother James (Janet) Shonk, grandchildren Nicholas (Jamie) Perfetti, Brianna (Uriah) Fadum, Kristin (Peter) Cpin, Lindsey (Rob Padilla) Saarela and Emily and Lily Pirila, and eight great-grandchildren. Visitation 11 AM until the noon Funeral Service Thursday at Williams-Lobermeier-Boettchera Funeral Home. Burial at Oneota Cemetery. Memorials Preferred.

To send flowers to the family in memory of Donald Saarela, please visit our flower store.