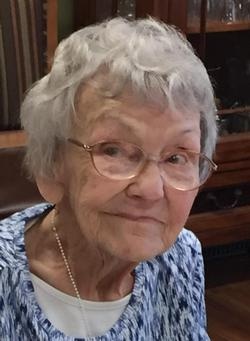 Doris Berggren Skorich, 95, passed away peacefully on March 9, 2017, at St. Mary's Hospital. A lifelong Duluth resident, she was born on June 13, 1921, to Jennie (Johnson) and Ed Berggren. She graduated from Denfeld High School in 1940. She then went on to marry Joe (Butch) Skorich on June 10, 1946. She loved the lord with all her heart and was a member of Duluth Gospel Tabernacle for nearly 65 years. She was a good cook and a wonderful baker whose homemade bread and chocolate cake were praised by all. She and her husband, Butch, were an exemplary aunt and uncle who loved all their nieces and nephews dearly and were always very generous with their time and affection toward them all. We will miss our loving and caring aunt very much until such time when we meet again. She is preceded in death by her husband, Butch Skorich, in 2000, her parents, a baby sister, brothers Clifford and Chester, and his wife, Jeanette; a special aunt Sally Heineman, and brother-in-law Lyle Carlson. She is survived by her sister Marion Carlson, a special niece Dori Carlson, and nieces and nephews Cathy Berggren and Bruce Berggren, Jeff Carlson, Sally Ruble, and Mary Chantland, as well as many grand- and great-grand nieces and nephews, cousins, in-laws, and friends. Vistation 10AM until the 11AM Funeral service Wednesday at Duluth Gospel Tabernacle, 1515 W. Superior St, Duluth. Burial at Oneota Cemetery. Williams-Lobermeier-Boettcher Funeral Home is entrusted with final care.

To send flowers to the family in memory of Doris Skorich, please visit our flower store.