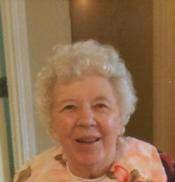 Doris H. Johnson Ziegler, age 86, Duluth, died July 31, 2013 at Benedictine Health Center. She was born in Duluth on October 25, 1926 to Albin and Hattie Johnson and was a 1945 graduate of Duluth Central High School. She married Carl "Bill" Ziegler on October 2, 1970. Doris worked as a secretary for her uncle Edwin Johnson at Kenwood Texaco and later worked at Kenwood Medical Center for many years until her retirement. She loved to travel. Her two favorite places were Sanibel Island and the Bahamas. Doris loved sea shells and anything that had shells on them. She liked her sweets and her family enjoyed her homemade fudge and peach pie. Doris also enjoyed making sea shell jewelry, photography, stamp collecting music and sewing. She was a longtime member of Bethel Baptist Church and Emmanuel Baptist Church. At Bethel Baptist, she sang in the choir and also sang duets. Doris was preceded in death by her parents, husband Bill and brother Richard Johnson. She is survived by her sister Margaret(Donald)Ostern, nieces Debra(Gordon)Kuntz and Kim(Mark)Garman, nephews Brent(Kathy)Johnson and Scott(Christine)Ostern and great nieces and nephews Katie Skare, Rachel Garman, Will Kuntz and Peter Johnson and sister-in-law Beverly Johnson. A Private Celebration Of Her Life was held at Williams-Lobermeier-Boettcher Funeral Home. Burial at Forest Hill Cemetery.

To send flowers to the family in memory of Doris Ziegler, please visit our flower store.