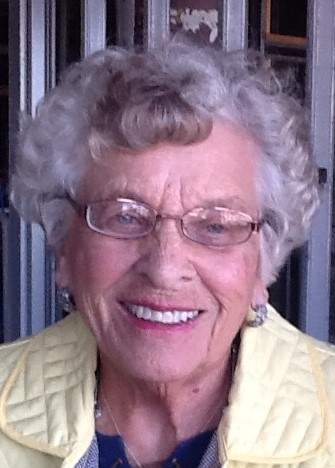 Dorothy A. Hoch, age 94, Duluth, died Sunday March 18, 2018, at St. Lukes Hospice.  She was born in Eveleth, MN, on October 23, 1923 to Fred and Ina Mickelson and lived there until the family moved to Duluth in 1936.  Dorothy was a 1941 graduate of Denfeld High School has served on the committee for all the reunions.  She had worked as a secretary/accountant at several downtown stores while attending Duluth Business University.  She also worked in Washington D.C. for the Corps of Army Engineers during WWII.  Dorothy received a certificate in sign language and was an aide in the hard of hearing dept. at Lincoln School.  She married Warren Hoch on Sept. 20, 1946 and they were married for 56 years.  She had been a member of the Lutheran Church of the Holy Trinity, its altar guild, Rebecca Circle, XYZ Club and many other committees.  Dorothy is currently a member of First Lutheran Church.  In the past she had been a Brownie and Girl Scout Leader, volunteered at the Duluth Depot and was a member of the West Duluth Womens Club.   Dorothy is preceded in death by her parents and her husband.  She is survived by her daughters Linda(Joe)Jeannette and Patty(Tom)Cartier, grandchildren Jeremy(Karen), T.J.(Kelley), and Griffin(Stacy)Jeannette, Andrea(Justin)Black and Matthew(Michelle) and Cory(Daisy),Cartier, great grandchildren Jacob, Niklas, Olive, Stanley and Coby Jeannette, Broden Grimm, Gabrielle, Kyler and Sylvia Black, Maggie, North, Ada, Cruz and Esme Cartier,  and favorite nephews Rollie, Gary, Bill, Scott, Tom and Peter Hoch.  Visitation 10AM until the 11AM Memorial Service Friday May 4, 2018, at First Lutheran Church, 1100 E. Superior St., Duluth.  Memorials will be given to Diabetes research. Williams Lobermeier Boettcher Funeral Home is entrusted with final care.

To send flowers to the family in memory of Dorothy Hoch, please visit our flower store.