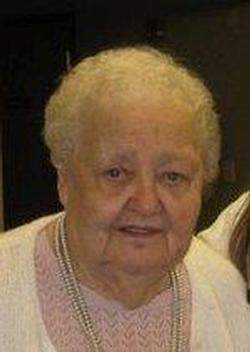 Dorothy Leona Stone, 94, of Duluth passed away April 22, 2015 at St. Mary's Hospital. Dorothy was born on July 3, 1920 to Joseph and Theresa Vogel, and grew up in Melrose, MN. She graduated from Melrose High School and moved to Minneapolis, where she met Chester A. Stone. They married on December 13, 1940 and moved to Duluth, where Chester was employed at the US Steel plant in Morgan Park. They had two children: Jerry and Janet. Dorothy was a full-time homemaker who dedicated her life to taking care of her family and helping friends and neighbors. She was the neighbor who always sent a platter of open-face sandwiches to funerals, who brought casseroles to friends who were sick, and who boxed up all of the clothes her kids had outgrown to give to the poor family across the tracks. She and Chester delivered Meals on Wheels from the time Chester retired until he was no longer able to drive. Dorothy loved spending time with her family. She was preceded in death by her parents; her sisters, Theresa Hanson and Eleanor Fenton; a brother, Sylvester Vogel; and her husband of 64 years, Chester Stone. Dorothy is survived by her son Jerry (Bev) Stone of Moose Lake; daughter Janet (Doug) Mroz of Hermantown; granddaughters Sheryl (Dan) Lilya, Kelly (Robin) Roeser and Kerry (Chad) Maniekee; grandsons Steven (Jestina) Stone and Joel (Shanna) Stone; and 11 great-grandchildren. Special thanks to Dr. Reena Kunreddy of St. Mary's Hospital and the staff at Spirit Valley Assisted Living for the wonderful care they gave to Dorothy. Visitation is from 10 a.m. until the 11 a.m. Mass of Christian Burial at Holy Family Catholic Church on 24th Avenue West and 3rd Street. Arrangements by Williams-Lobermeier-Boettcher Funeral Home.

To send flowers to the family in memory of Dorothy Stone, please visit our flower store.