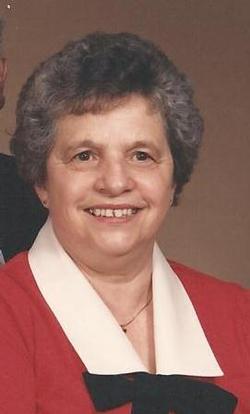 Dorothy Florence (Rock) Vieira, 89, died October 12th, 2014 at Edgewood Vista Assisted Living in Hermantown. She was born in Duluth Minnesota December 18,1924 to Mederic and Angelina Rock. She graduated from Denfeld High School in 1943 and then went on to graduate from the Duluth Business University. She met Arthur Vieira in Duluth while he was stationed in the Coast Guard. They were married June 8th, 1946 Before having her family, she worked as a secretary for the Duluth School District.

Dorothy enjoyed the companionship of many special friends, including those from the 13th Street neighborhood, her many years as a Charter member of the Ensign Garden Club, her love of baseball, including the Twins in later years and her monthly games of pinochle with her longtime buddies. She was a member of St. Lawrence Catholic Church, OK Club and often volunteered for many other church activities.

Dorothy was preceded in death by her husband, Arthur, parents, and brothers, Harold and Lloyd Rock.

Dorothy's daughters would like to extend heartfelt thanks to their (special) friends, the extraordinary staff at Edgewood Vista. It was their love and kindness that allowed Dorothy to continue to be such a wonderful person even after losing the love of her life. They also would like to thank the wonderful staff and special volunteers at St. Mary's Hospice who helped her through tough times in the last year. Visitation 10AM until the 11AM Funeral Service Thursday at St. Lawrence Catholic Church, 2410 Morris Thomas Road, Duluth. Burial at Calvary Cemetery, Duluth. Memorials , in care of the family, are preferred. Arrangements by Williams-Lobermeier-Boettcher Funeral Home.

To send flowers to the family in memory of Dorothy Vieira, please visit our flower store.