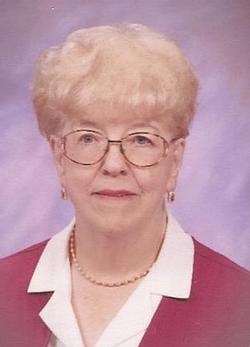 Edna Evelyn Corser, 95, of Berkeley Road, died Tuesday, March 14, 2017 in Essentia/Miller Dwan surrounded by her family. Edna was born on March 29, 1921 in Duluth to Erick and Emelia Erickson. She married Marshall Corser on August 23, 1941 in Duluth and had worked for Glass Block, UMD Food Services and Western Electric. She was a member of the Solway Seniors, and Christ Lutheran Church where she was active with the Mary Circle and funeral committee. Edna was generous with her time, knitting hundreds of hats and mittens for "Lots for Tots" over the years. Edna was a wonderful mother and grandmother, she loved baking, cooking and sewing. Her home was always open for friends and family to stop by where the coffee was on and the homemade cookies were warm. Edna was preceded in death by her parents, two brothers, Elmer and Ernest Erickson, a sister, Ellen Renne, and her husband, Marshall. She is survived by her daughters, Carol Corser and Ilene (Mike) Daigle; four grandchildren, Jennifer Omundson, Marshall Omundson, Krista Holman and Terry Omundson; five great-grandchildren, Sydney and Jeffrey Omundson, Audrina and Aubree Holman and Tucker Omundson; several nieces and nephews. Visitation 1 p.m. until the 2 p.m. Funeral service Tuesday, March 21, 2017 at Christ Lutheran Church, 2415 Ensign Street. Pastor Michael Main officiating. Burial in Oneota Cemetery.

To send flowers to the family in memory of Edna Corser, please visit our flower store.