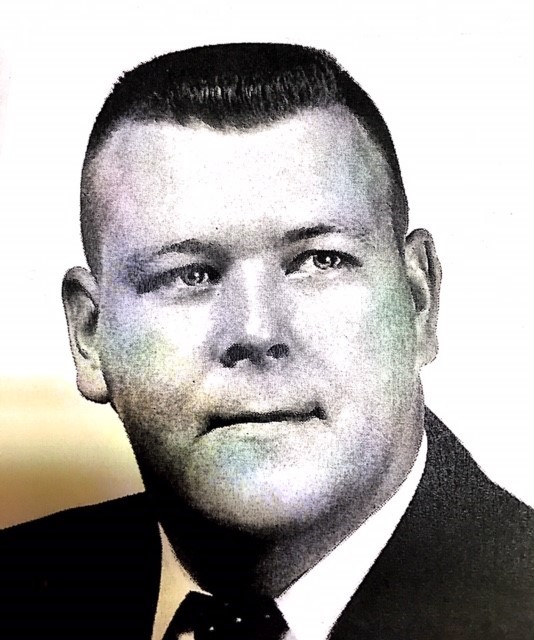 Edward “Ted” A. Jacobson, 84, of Duluth, passed away Monday, October 8, 2018 at Chris Jenson Center in Duluth. He was born on August 18, 1934 in Cloquet, the son of Henry and Rose (Jokela) Jacobson, and graduated from Cloquet high school in 1952.  His youth was especially devoted to baseball.  Ted served in the US Army in the mid 50’s, stationed in Germany with the 256th Field Artillery Battalion. After graduating from UMD with an Education Degree in History and Phy Ed, he taught social studies and coached various sports at South Shore High School (Port Wing, WI) and later in Duluth at Denfeld, Washington Jr and Central, retiring in 1993. Ed was actively involved in church activities at Wesley United Methodist as treasurer, choir member, and Lay Delegate to annual Minnesota UMC conferences.  Ted married Beatrice Olson in 1957. They raised five kids on Park Point, and were especially dedicated hockey parents. In later years he enjoyed golf and bowling leagues, cribbage with family, and spending time with children and grandchildren.  He was an avid reader of US and world history. He is preceded in death by his parents, a brother William, and a son, Gary Allen.  He is survived by his wife Beatrice, sons Douglas of Duluth, Duane (Susan Coopmans) of Minneapolis, Jack (Jill Moon) of Cloquet; daughter Jill (Paul Nelson) of Duluth, sister Marilyn (Chuck Huettl) of Eden Prairie, grandchildren Christopher, Ben, Lia, Peter, Henry, Liisa, Matthew, Parker; and great granddaughter Rebekah.  The family would like to thank the staff at Chris Jenson Center and St. Luke’s Hospice for their compassion and comfort to the family.  Ted will live forever in the hearts of family, friends and the many students he impacted over his lifetime.  Visitation 10 a.m. until the 12 noon Funeral service Saturday, October 13, 2018 at Hillside United Methodist Church, 1801 Piedmont Avenue, Duluth.  Pastor Cynthia Coffin-Langdon officiating. Military Honors will be accorded by the Duluth Honor Guard immediately following the service at the church. Burial at Park Hill Cemetery.  In lieu of flowers, memorials may be sent to Hillside United Methodist Church. Arrangements by Williams Lobermeier Boettcher Funeral Home.

To send flowers to the family in memory of Edward "Ted" Jacobson, please visit our flower store.