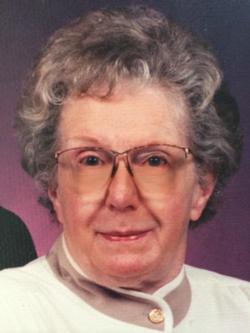 Elaine Marie Haak, 92, of Duluth, died Friday, July 11, 2014 in Heritage Haven. She was born on April 22, 1922 in Brainerd, MN to Anton and Anna Link. Elaine was a 1940 graduate of Proctor High School and a 1942 graduate of the Duluth Junior College. She worked for the Duluth Junior College and also for the St. Louis County Treasurer's office. Elaine was united in marriage to Howard Albert Haak in September, 1953 in Baltimore, Maryland. Elaine followed Howard as he began his career with the U.S. Public Health Service and they lived in various cities including Lexington, Ky., New York City, N.Y., Baltimore, MD, Washington D.C., Detroit, Mich., Cleveland, Ohio and Chicago, Ill. In 1979, Elaine and Howard moved to their new home in Proctor and were members of St. Rose Catholic Church. Elaine and Howard moved to Heritage Haven in Duluth in September, 2007. Elaine was preceded in death by her parents, a sister and brother-in law, Gertrude and Herbert Klippen, and husband, Howard in 2010. She is survived by her close friends, Theodora Hughes and Mary Monson. Thank you to the staff at Heritage Haven, especially Rebecca for all the wonderful care. VISITATION: 10 a.m. until the 11 a.m. Mass of Christian Burial, Wednesday, July 16, 2014 in St. Rose Catholic Church, Proctor. Rev Fr Joel Hastings officiating. Burial at Oneota Cemetery. Memorials to St. Rose Catholic Church would be appreciated.

To send flowers to the family in memory of Elaine Haak, please visit our flower store.