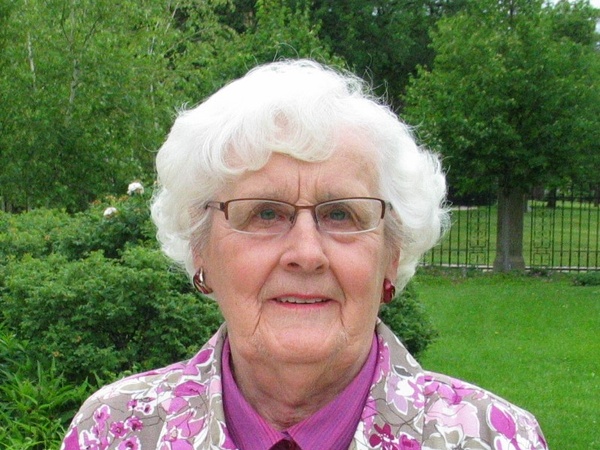 Eleanor was born at home on Mesaba Avenue in Duluth on May 25, 1923 to Helga (Koivisto) and Paul Huhtala. Her father immigrated to Duluth through the Great Lakes from Oulu, Finland. Helga was born in Duluth but went back to Finland as a toddler, returning to America in 1911 as a young girl. Eleanor moved with her parents to her grandparent’s farm in Calumet on the Iron Range. Her most cherished memory of her childhood was time spent with her mother picking blueberries.

Eleanor left home and lived with relatives to attend high school in Keewatin, graduating as valedictorian of her class in 1941. She attended Hibbing Junior College for two years and then went on to finish her education at the U of MN at the Saint Paul “farm” campus. She received some scholarship money and also worked at a seed lab for 50 cents an hour to pay for tuition. She studied interior design and fashion/textiles with the renowned Goldstein Sisters, Harriet and Vetta.

After graduating from college, she accepted a Home Economics teaching position in Gilbert, MN where she met her husband of 45 years, Bernie. After returning from service as a navigator in the Army Air Corps during WWII, Bernie was playing basketball in the school gym when he sent a bounce pass to the pretty new teacher. Their wedding on June 18, 1949, was the largest and loveliest the small town had ever seen. Eleanor wore a bespoke “Alice Blue” gown and had four bridesmaids dressed in her favorite shade of the color. The happy couple spent their honeymoon at a rustic cabin on Lake Kabetogama and toured the North Shore.

In the fall after their marriage, Eleanor and Bernie moved to Duluth where she had accepted a teaching position at UMD. She found great pleasure in the lifelong friendships she developed with her students as an advisor to many of the young ladies. After eight years, Eleanor left teaching to stay home and raise a family. Jeffrey was born in 1958, the same year Eleanor founded and became the first president of the Arrowhead chapter of the Minnesota Home Economists in Homemaking. As a young mother, she organized a group of ten women living in the Woodland neighborhood for frequent gatherings. “The Birthday Club” celebrated friendship and community.

She went on to become a longtime educator in the Evening Adult Education program of the Duluth Public Schools while raising two boys after Michael arrived in 1965. After 17 years spent teaching outreach and evening classes all over the Arrowhead, she became one of the original faculty at the Duluth Secondary Vocational Center in 1974. She was named the Minnesota Home Economics Teacher of the Year in 1979 and was runner-up in the national contest.

Eleanor retired from teaching in 1990 to care for her ailing husband until his death in 1994. In the following years, Eleanor enjoyed traveling to Finland, Hawaii and Aruba with her dear friend and former student, local cookbook author, Bea Ojakangas. She loved entertaining friends and family on summer days at her historic log cabin on Big Pequaywan Lake. A second trip to Finland in 1999, with her brother Dale’s family, was highlighted by a visit to her ancestral homestead in Jalasjärvi, where she was able to meet many relatives.

Due to declining health, Eleanor moved to the Twin Cities in 2004 to be closer to Jeff and Mike. Eleanor’s health improved and she regained her independence. She enjoyed exploring her heritage through Finnish American Cultural Activities, attending the concerts and plays of her grandchildren, art museums, theater and movies. Eleanor returned to Duluth many times for Home Ec association meetings and to reconnect with old friends, former students and colleagues.

In lieu of flowers, donations may be made in her memory to the Eleanor Kraker Family and Home Scholarship Fund at UMD. Please send in care of Michael Kraker at 286 Country Road, Stillwater MN 55082. Please visit the Williams Lobermeier Boettcher website or the Duluth News Tribune obituary page to share a memory or leave a message of condolence.

To send flowers to the family in memory of Eleanor Kraker, please visit our flower store.