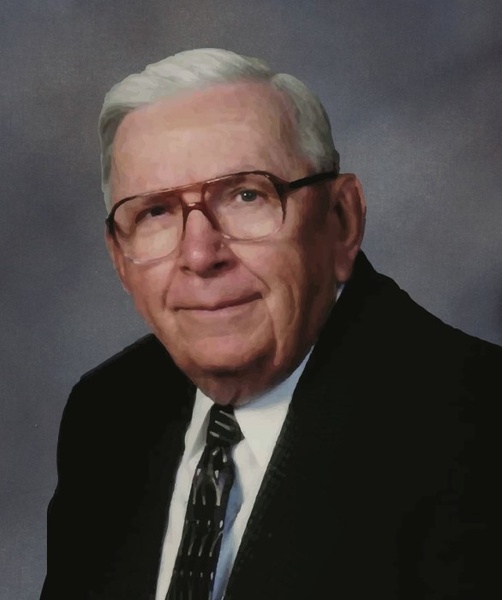 Eli Kokotovich, 95, passed away on Oct 20, 2019, at Primrose Retirement Community of Duluth.  Eli was born on Jan 10, 1924, in Hibbing, MN, to Jovo and Milosova (Stuckich) Kokotovich.He was a graduate of Hibbing High School, class of 1941. He attended Junior College in Hibbing and then enlisted to serve in the army in World War II. After the war, he went back to school and graduated from the University of Minnesota Twin Cities College of Pharmacy. He was working as a pharmacist in Thief River Falls when the army called him back to serve in the Korean Conflict. When he came back, he moved to Duluth, where he would work the rest of his career, eventually owning and running Rutter Pharmacy.  Eli married Georgia Johnson in Hibbing on June 23rd, 1950, and they raised two sons in Duluth. Eli was an active member of St. George Serbian Orthodox Church, belonged to Euclid Lodge No. 198, and was a long-time board member of Oneota Cemetery. During his life he loved sports and spending time outdoors. He played fastpitch softball, bowling, golf, and curling, was an avid fisherman, and looked back fondly at his years playing American Legion baseball. Eli loved spending time with his family. He spent many hours watching his grandchildren’s dance recitals, band concerts and sporting events, and in later years he enjoyed time with his great-grandchildren.  He was a kind, caring man whose sense of humor brought smiles to those around him.

Eli was preceded in death by his parents, his wife, Georgia, of 66 years, and his brothers Bill and Mike Kokotovich.

Eli is survived by his sisters-in-law Shirley and MaryAnn; his sons Joe (Candy) and Steve (Barb); grandchildren Jill (Dan) Lepisto, Amy, Adam (Katie Clower), Matt (Cari), Tim (Brittany Leknes); and great-grandchildren Ale, Kari, Kendall, Ryan, Abby, Eliza, and Henry. He is also survived by his especially close niece and nephew Sue (Glenn) Modean and Tracy Lundeen, and many other nieces and nephews.  The family would like to extend a special thanks to the wonderful, caring staff of Primrose.  In lieu of flowers, memorials are preferred to St. George Serbian Orthodox Church.

To send flowers to the family in memory of Eli Kokotovich, please visit our flower store.