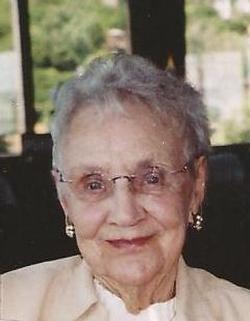 Elma S. French, Duluth, died April 29, 2014 at St. Luke's Hospital surrounded by her family. She was born in Taconite, MN, to Oscar and Agnes Lindemann. She married William French on October 4, 1958. Elma was a member of the West Dululth Women of The Moose and former Women's League bowler at Stadium and Country Lanes. Her passion was singing and playing the drums. She had played at various nursing homes and the Rainbow Center for many years, forming the band Young At Heart. She was preceded in death by her parents, husband, 3 sisters , 1 step-brother and sons in law Roger Goode and Gene Schuldes. Elma is survived by her daughters Donna Schuldes, Appleton, WI, Gale(Clem)Solarz and Vicki Goode, all of Duluth, 9 grandchildren and 15 great-grandchildren and 1.9 great-great-grandchildren. The family would like to thank St. Luke's Hospice for their excellent care. Visitation 9:30AM until the 10:30 Memorial Service Saturday at Williams-Lobermeier-Boettcher Funeral Home. Inurnment Oneota Cemetery.

To order memorial trees or send flowers to the family in memory of Elma French, please visit our flower store.