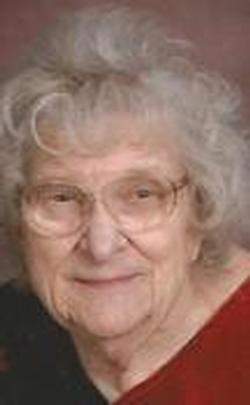 Elvy C. Johnson, 91, of Duluth, died on March 11, 2016 in St. Luke's Hospice. She was born on April 21, 1924 in Duluth to Elof and Hilma (Carlson) Johnson. Elvy was a lifelong Duluth resident and lived a long and full life. She was a 1942 graduate of Denfeld High School, after which she became a parish worker at Bethany Lutheran Church in Duluth. She later traveled to Sweden with her parents, where she could fully use the Swedish language she grew up speaking. After her return from Europe, she attended The Lutheran Bible Institute, worked as a legal secretary and held a position at the St. Louis County Probation Office. On Nov. 30, 1957, Elvy married Verner E. Nelson and moved to Barnum, where Verner owned a farm. Later, they adopted Jim, Caroline and Brad. In 1971, the family moved to Duluth after Verner was diagnosed with ALS. Elvy helped support the family by working as a legal secretary, and eventually getting a position in the Duluth City Clerk's office, where she worked for the City Council and Charter Commission. In 1985, Elvy retired to care for Verner, who passed away on Jan. 31, 2002 and enjoy time with her grandchildren. She had a great love for music and had played her keyboard until two weeks prior to her death. She was a member of Holy Cross Lutheran Church. Elvy was preceded in death by her parents, spouse, Verner E. Nelson and brother, Edmund Johnson. She is survived by her daughter, Caroline Kresal; sons, James (Patricia) Nelson and Bradley (Mary) Nelson; seven grandchildren; three great-grandchildren; one niece and one nephew. Visitation will be from 11 AM until the 12 Noon service Wednesday in Holy Cross Lutheran Church, 410 N. Arlington Ave. Rev. Michael DeKraai will officiate. Burial will be in Bethany Cemetery. If so desired, memorial contributions may be directed to Holy Cross Lutheran Church Music Program. Final care is entrusted to Williams-Lobermeier-Boettcher Funeral Home.

To send flowers to the family in memory of Elvy Nelson, please visit our flower store.