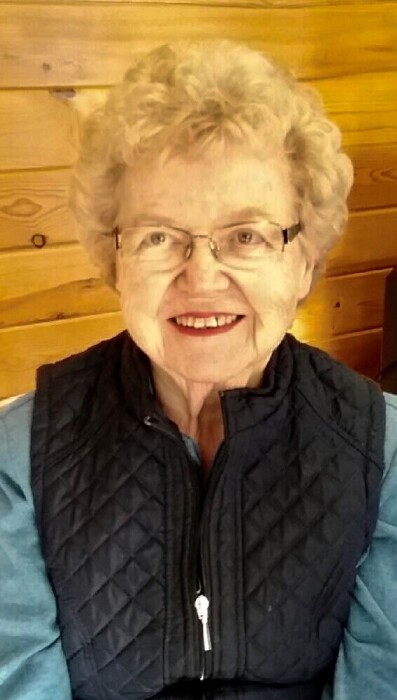 Esther Bjorlin Berntsen (Jampsa), 91, was born June 9, 1929 to Emil and Ellen Jampsa of Wolf Lake, MN. The third of four children, she was raised by relatives after the early deaths of both of her parents. After graduating from Frazee High School, she moved by herself to Duluth to attend beautician school. After an initial double date in which they were both paired with other people, Esther and Donald (“Blondie”) Emil Bjorlin found each other to be more suitable partners and were married on April 22, 1950. The couple settled in Hermantown where they built a house, raised four children, and ran the family business, Reliable Sanitary Service.

Esther worked as the business manager of the company until they retired and sold the business in 1985. After Blondie’s death in December of 1988, Esther kept busy by baking her world-famous (or at least Twin-Ports-famous!) buns, giving perms to her friends and family, and going on a variety of bus tours with other retirees. On one of these bus trips to Branson, she met her future husband Raymond Berntsen. After dating for over a decade (just had to make sure they were compatible!), the two were married on April 23, 2005 and lived together until Ray’s death in 2009. Esther spent the rest of her years baking buns, playing cards or dice with friends (always accompanied by a stream of thinly veiled trash talk), keeping her regular Saturday morning breakfast appointment at Bridgeman’s, and watching every televised game of her beloved Twins. She died peacefully on December 8, 2020 at Edgewood Assisted Living.

Esther’s Christian faith was central to her life, and she was a faithful member of First Covenant Church where she attended and volunteered for over 70 years. She was also proud of her Finnish heritage and for decades kept in contact with several relatives still living in Finland.

Esther will be remembered for her resilience (what the Finns call sisu), hospitality, quick laugh, and, above all, her abiding generosity. Whether it was a pack of buns, a ride to church, or money to get through a rough patch, Esther decided to live simply so she could give freely to others. In an often anxious world, she consistently chose joy over worry because, as she often reminded her family, “What you worry about likely won’t happen anyways.”

Due to COVID-19 precautions, a public memorial service will be planned when it is safe to gather again. Memorial gifts may be sent to Duane Bjorlin, 3208 W 3rd Street, Duluth, MN 55806, with all proceeds going to Edgewood Assisted Living in gratitude for their care of Esther over the past several years.

To order memorial trees or send flowers to the family in memory of Esther Berntsen, please visit our flower store.