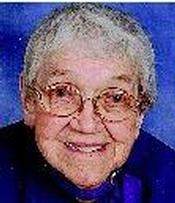 Evelyn Sylvina Nappe, 96, entered into Paradise with her Savior, Jesus Christ, on July 17, 2013 at the Solvay Hospice House in Duluth. Evelyn was born in rural Lake Mills, Iowa on May 13, 1917 to Ole and Mathilda (Johnson) Nappe. At the age of 2, Evelyn's mother died; but she continued to be cared for by her Aunt Hanna Johnson, according to a promise that Hanna had made to her dying sister. Evelyn remained single. Following her graduation from high school, she worked in the Lake Mills area cleaning offices and doing clerical work for a doctor and an attorney in town. From there, she pursued a career in nursing at Fairview Hospital School of Nursing in Minneapolis. Evelyn served as a nurse in Texas and as a public health nurse in Rochester and St. Cloud, MN and Buffalo Co., WI. She also taught at Gustavus Adolphus College School of Nursing in St. Peter, MN. She obtained her Master's Degree in Nursing with a major in psychiatric-public health from the University of Washington in Seattle. In 1972, she moved to Duluth to become the nursing supervisor for the St. Louis County Health Department. Later, she joined the faculty of the College of St. Scholastica - Nursing School, until 1986 when she retired. Most prominent in her life was her relationship with God. Having learned the principles of God's Word daily at home from her aunt and her grandfather, she also attended Sunday School and summer church school. As an adult, she attended the Lutheran Bible Institute in Seattle, WA and later in Golden Valley, MN. Evelyn was a long time member of Christ Lutheran Church in Duluth, and served as a Deaconess in the congregation. She is survived by many cousins, with whom she corresponded for many years; being especially close to Rosalyn Voigt, whose prayers and cards and letters encouraged Evelyn up to the end. She also had many friends, for whom she was grateful, including Theresa Anderson, Pat Michals, and Carol Ziemer. She also considered her church to be an extended family that God had given to her. Evelyn struggled with fibromyalgia for many years, leading to her early retirement from nursing. She was grateful for the care afforded to her in the last years of her life from Donald Gitz, and then in her time of hospice care from Donald Gitz, Jeannie Conklin, Jenine Novack, Melissa Kubiak, Jan Main, Barb Switzer, and Pastor Michael Main. Special thanks also to the staff at Solvay Hospice House for their compassionate and competent care. Visitation will be from 10 until the 11 a.m. funeral service Saturday, July 20, 2013 in Christ Lutheran Church - AALC 2415 Ensign St. in Duluth. Graveside Committal on Monday July 22nd 11:00 a. m. at Bethany Cemetery in Hermantown Memorials to Christ Lutheran Church and Solvay Hospice House would be appreciated.

To send flowers to the family in memory of Evelyn Nappe, please visit our flower store.