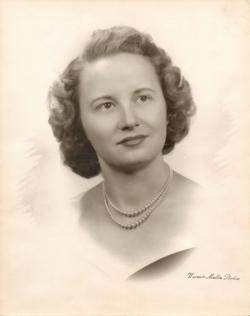 Florence M. (Puhl) McDonell, 91, of Duluth, passed away in her sleep on Oct. 12, 2016 in Golden Oaks Assisted Living Facility. Florence was born May 5, 1925 in Haugen, Wis., to Louis and Ameila (Vinopal) Puhl. She was the youngest of eight children. During her childhood and early teen years Flo spent much of her time with her cousin and good friend Shirley Heinz. She spoke fondly of all the things they used to get up to together on the farm. Florence moved to Morgan Park in Duluth, during the middle of her senior year. Florence married John "Jay" McDonell on Sept. 15, 1951 in St. Margaret Mary's Catholic Church in Morgan Park. Florence and Jay had seven children, Thomas Allen, Mary Ann, David John, Scott Louis, Mark Steven, Bruce James and Michael Joseph. Flo was a socially active person. She had the same close circle of friends for over 52 years. They would often meet for cards and lunch. Florence loved to travel, often visiting family. She was always careful to write everything down and keep detailed records of family and life events. Family history was always of special interest to her. She loved her family and gave them everything she had. She especially cherished spending time with her great-grandchildren Caleb and Abigail. She remembered them long after everything else hadbeen lost to dementia. Florence always said her life was not easy, it was damned hard, but she wouldn't trade it. Florence was preceded in death by her husband John "Jay" McDonell; her sons, Thomas Allen and Michael Joseph; her parents, Louis and Amelia Puhl; and siblings, Joseph, Richard, Victor, Anna, Harold, Anthony and Ted. Florence is survived by her children, Mary, Dave, Scott, Mark and Bruce; her grandchildren, Michelle and Pete Boyechko, Joseph McDonell, Carolin McDonell, Jessica McDonell, Alan McDonell, Anthony McDonell, Andrew McDonell; great-grandchildren Caleb and Abigail, Easton, Dexter, Liliana and Mikaela. Per Florence's request a small graveside ceremony was held at Calvary Cemetery in Superior, on Oct. 22, 2016. Condolences may be sent in care of: Michelle Boyechko, 7177 Hwy 210, Tamarack, MN 55787

To send flowers to the family in memory of Florence McDonell, please visit our flower store.