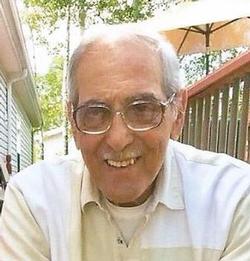 Frank Richard Michael Pitoscia "FRMP" of Hermantown, passed away at the Silver Bay VA on Friday February 24th, 2017. He was born at home in Duluth on July 17th, 1930 to Sandale and Vincent Pitoscia. Frank joined the Army in September 1948 to September 1949. Then the Korean War started and he reenlisted in October 1950 and served at the rank of 1st Sgt. in Korea until September 1953. He earned his GED while overseas. When he came home he joined the MN Army National Guard until his retirement in October 1986. He also served as a 2nd Lt. on the Duluth Honor Guard. Throughout his life he had multiple jobs, but he dedicated 29 years of service to Duluth as a Police Officer from April 1st 1956 until his retirement on December 27, 1985. After retirement Frank kept busy taking care of his grandchildren. He was also a member of the Lake Avenue Loafers and the Italian American Club. Frank married Orma Jean Hantelman on August 19th, 1961 at St. Jean-Baptiste Catholic Church in Duluth. He is proceeded in death by his parents, brothers and sisters in law, Albert (Blanche), Vincent (Pat), John "Jack" (Bev) and his sister Florence and brother in law Jack Sullivan. Frank is survived and will be dearly missed by his wife Orma, married 55 A½ years, his daughters Laura (Howie) Gunderson, Karen (Ron) Kucza and his son Frank (Marcia Kopish) Pitoscia Jr. Frank's grandchildren Ryan (Jacqui), Rachel (Marc), Kyle, Chad (Whitney), Cory, Nicole, Kaden, Jenna, Tony and Amy. His great-grandchildren, Tanner, Emery, Emerson and another due in July. Visitation 10AM until the 11AM Mass of Christian Burial Thursday at St. James Catholic Church, 721 N. 57th Ave W. Duluth. Honors are accorded by theDuluth Honor Guard and Duluth Police Honor Guard. Williams-Lobermeier-Boettcher Funeral Home is entrusted with final care. Memorials to the Alzheimer Assn or Duluth Honor Guard, in care of family, are preferred.

To send flowers to the family in memory of Frank Pitoscia, please visit our flower store.