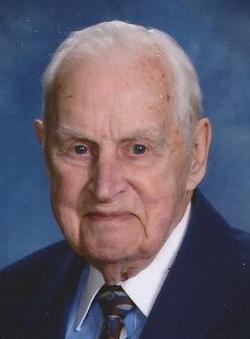 George C. Anderson, age 97, Duluth, died June 15, 2014 at Viewcrest Health Center. He was born in Carlton, MN, on August 28, 1916 to Charles and Ethel Anderson but was a Duluth resident most of his life. George was a 1934 graduate of Denfeld High School and an Army veteran of WWII. He married Grace Johnson in Duluth on August 14, 1939. He had worked at Zinsmaster Whole Rye Co. for 5 years. He then worked as a railway mail clerk for the U.S. Postal Service for 21 years and later worked at the main post office for 10 years, retiring in 1972. After retirement George was the manager of the Federal Employees Credit Union until 1982. He was a member of Zion Lutheran Church, serving as treasurer for over 57 years and singing in the choir. He is preceded in death by his parents, wife, sister Ruby Andersen and brother Carl. George is survived by his children Craig(Barbara ), Longville, MN, Timothy(Cindy), St. Paul, daughter Cheryl(James)Zawislak, Hermantown, grandchildren Kevin(Marie) Anderson, Kimberly(Bill) Gillette, Lisa(Kyle)Koch, Holly Zawislak and Jennifer (Justin)Place, 8 great-grandchildren and several nieces and nephews. Also a special thanks to the staff at View Crest Health Center and to his kind neighbors. Visitation Thursday5-7PM at Williams-Lobermeier-Boettcher Funeral Home and continues from 10AM until the 11AM funeral service Friday at Zion Lutheran Church, Duluth. Burial at Park Hill Cemetery. Military honors accorded by the Combined Duluth Honor Guard. In lieu of flowers, memorials to Zion Lutheran Church, in care of the family, are preferred.

To send flowers to the family in memory of George Anderson, please visit our flower store.