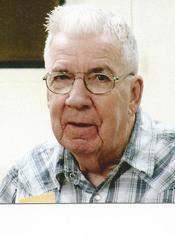 Gerald Roy "Jerry" Sime, 81, Duluth, died June 21, 2012 at St. Luke's Hospital. He was born in Bemidji, MN, on January 7, 1931 to Lee and Elyn Sime. He was a 1949 graduate of Denfeld High School. Jerry served in the Air Force during the Korean War. After discharge he enlisted in the Minnesota Air National Guard, working at the Duluth Air Base as a Fireman, retiring in 1986 as Assistant Fire Chief. Jerry was an active member of Zion Lutheran Church serving on its church council, was a Choir Member and involved in Bible Study. He was also very involved with the Twin Ports Ministry To Seafarers. In his early years he was a member of its Governing Board and was currently an active ship visitor. Jerry was a familiar face at the St. Louis County Courthouse, doing genealogy searches there for many years as well as attending Douglas County Genealogical Society meetings. He was a member of the Nortun Lodge, Sons Of Norway, where he was valued for his engagement with others, the Norsemens Federation, the Swedish Cultural Society and the Swedish Choir. After his fathers death, Jerry and his mother made trips to both Norway and Sweden to visit relatives. Jerry drove for the home delivered meals program and helped set tables for the Senior Dining at Holy Cross Lutheran Church. He bowled in the Country Lanes Senior League and the 148th Bowling Team. He was preceded in death by his parents and brother Denis. He is survived by his sister-in-law, 4 nephews, 1 niece, many great nieces, nephews and friends. Visitation 11AM until the 1PM Funeral Service Friday in Zion Lutheran Church, Duluth. Burial at Ft. Snelling National Cemetery, Mpls. Memorials to Zion Lutheran Church are preferred. Arrangements by Williams-Lobermeier-Boettcher Funeral Home.

To send flowers to the family in memory of Gerald Sime, please visit our flower store.