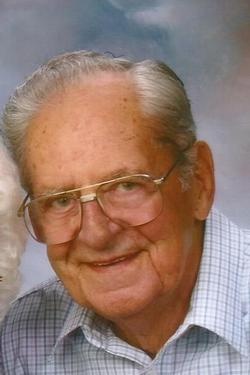 Gilbert W. "Gil" Johnson, 91, of Edgewood Vista, passed away peacefully on Saturday, May 2, 2015 in Miller Dwan Hospital. Gil was born in Duluth on June 16, 1923 to Gilbert and Amy Johnson. He was a 1941 graduate of Central High School and served in the Army Air Force in Kunming, China where they supplied oxygen for the airplanes. After the war, he married Ulla "Ollie" Carlson on June 14, 1947 in Duluth. Gil worked as a pressman, retiring from Stewart-Taylor Printing in 1985. Following his retirement, Gil worked for Krenzen Auto, where he drove shuttle vehicles until the age of 80. Gil was a life-long member of First Covenant Church, where he held various positions and worked on many committees. He was a member of the American Legion Mark Christian Post 558, Skyline Rotary where he was Rotarian of the year in 1980, The Printing Craftsman Club, served on the Union Cemetery Board and was involved with the Indian Guides and Boy Scouts. Gil enjoyed traveling and camping, and for his 90th birthday, took the Honor Flight to Washington D.C. accompanied by his son, Rick. He was preceded in death by his parents and a brother, Rev. Clifford H. Johnson. He is survived by his wife, Ollie; three daughters, Nancy (Mike) Jones of Punta Gorda, FL, Barb (Ron) Meyer of Duluth and Diane (Doug) Hinderks of Duluth; a son, Rick (Mary) of Hermantown; 10 grandchildren, three step-grandchildren, four great-grandchildren, two step great-grandchildren, sister-in-law, Alayne Johnson of Northbrook, IL, and many nieces and nephews. Visitation will be from 5 to 7 p.m. Thursday in Williams Lobermeier Boettcher Funeral Home and will continue from 10 until the 11 a.m. funeral service Friday in First Covenant Church, 2101 West 2nd St, Pastor Mark Kelly officiating.

To send flowers to the family in memory of Gilbert Johnson, please visit our flower store.