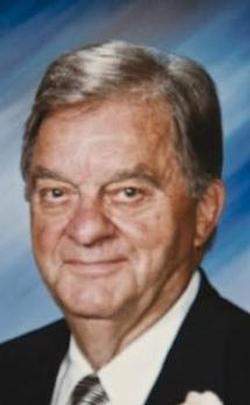 Glen Leroy Nodgaard, 88, of Duluth, died peacefully at home Friday, Sept. 25, 2015, surrounded by his loving family following a short battle with cancer and a longer journey with dementia. Glen was born on a farm near Griswold, Iowa, to Danish immigrant parents, Jens and Edith Nodgaard, Oct. 28, 1926. He grew up in Atlantic, Iowa, during the post-Depression years working hard as a teen to help his family and graduated from Atlantic High School in 1944. Glen had a lifetime of service to business, family, community and country. He served the U.S. in the Army in the Philippines during World War II. He married Gloria Peters June 6, 1948. Their 67-year marriage was blessed with three children, Trudy, Steve and Kristin. Following the war, Glen returned to Atlantic and went to work in the retail shoe business. He continued in the shoe business moving to Chariton, Iowa, in 1950; to Madison, Wis., in 1964; and to Wisconsin Rapids, Wis., in 1966 through 1984 where he owned Nodgaard's Shoe Store. Late in his career he worked for The Equitable (AXA Financial) as district manager in Appleton, Wis. Glen shared his love of and many talents for music and theater with his community wherever he lived. He played leading roles in many musicals, including a role as professor Harold Hill in the first ever amateur production of Meredith Wilson's "The Music Man" held in Chariton. He was a founding member of the Aeolian Singers there and the Mid-Americans in Wisconsin Rapids. Glen joined the Fraternal Order of the DeMolay, later entering Freemasonry and then in 1948, Glen was raised to the degree of Master Mason. Friendship with his Masonic brothers meant much to him. He spent many years in philanthropy to the Shriner's Children's Hospitals. He was a parade clown in the Funsters shrine group of Zor Shrine Temple and served on Zor Temple's Divan and then was Potentate in 1980. Glen cherished sharing fun with his children and grandchildren. He also loved being outdoors; skiing, hunting, fishing, gardening and woodworking. Glen and Gloria traveled throughout the U.S. in their early retirement and after fishing three summers in Alaska, he was spoiled forever. During retirement they also resided in Grand Marais before his final home at Gramercy Park in Duluth. He was preceded in death by his parents, Jens and Edith Nodgaard; brother Arnold Nodgaard; and sisters Viola Eastman and Phyllis Rhoades. Glen is survived by his wife, Gloria; children Trudy Nodgaard of Duluth, Steve (Lynn) Nodgaard of Columbia Heights, Minn., and Kristin (Robert) Ryan of Duluth; grandchildren Ryan (Amanda) Langton, Nathan (Theresa) Langton, Lindsey Sachs, Brie Nodgaard, Hallie Ryan, Kaitlin Ryan, Trisha Ryan and Connor Ryan; great-grandchildren Cadie, Maggie, Hayden, Harper and Asher; extended family of Charlie (Sarah) Johnson and children Owen, Cooper, Ireland and Finlee, Stephanie (Anj) Johnson-Ronay and children Arlo and Emil, and Ashley (Kris) Block; and other nieces and nephews. VISITATION: 10 until the 11 a.m. service Tuesday, Sept. 29, in St. Andrew's by the Lake Episcopal Church, 2802 Minnesota Ave., Duluth. Lunch will follow. Private inurnment at Northern Wisconsin Veteran's Memorial Cemetery will be the following day. In lieu of flowers, memorial gifts to Miller Dwan Foundation/Solvay House or the Duluth Playhouse.

To send flowers to the family in memory of Glen Nodgaard, please visit our flower store.