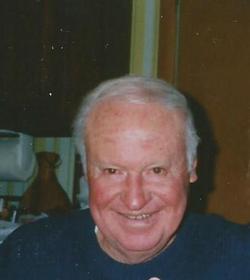 Glenn Lawrence Rolle, 93, of Tyrol St, died Tuesday, July 29, 2014 in his home. Glenn was born on April 20, 1921 to Lawrence and Jennie (Ranzoni) Rolle in Eveleth, MN. Glenn graduated from Eveleth High School and attended Eveleth Jr. College. He graduated from the University of Illinois in 1943 and joined the Army where he was the Physical Training Instructor in Orlando, FL. Following his service, Glenn started his teaching career in Hermantown and then to Duluth East in 1951. Glenn married Dorothy Ann Cheslak on August 25, 1951 and also continued his studies at UMD, where he received his Masters of Education. While at Duluth East, Glenn taught Physical Education and Health, and was the head hockey coach for 14 years. During his years of coaching, he had four state tournament appearances, a championship in 1960 and third place in 1961, and 12 city championships in District 26. Glenn retired from coaching in 1967, continued teaching, and retired as the Athletic Director from Duluth East. Glenn was a member of St. Lawrence Catholic Church and the OK Club. He was a past member of the Italian American Club. He loved spending time with his family, enjoyed gardening, decorating for Christmas and was an avid golfer. He was preceded in death by his parents; his wife, Dorothy; brothers, Dennis and Bernard Rolle. He is survived by a son, Lawrence (Julie) of East Peoria, IL; a daughter, Bernadine Rolle of St. Cloud, MN; a sister, Jane Rolle of Duluth; a granddaughter, Glenda Rolle of Oceanside, CA; nieces and nephews, Sally Gershon of Tucson, AZ, Phil Rolle of Duluth, Larry Rolle of Dallas, TX, Ann Kreider of Minneapolis, Nina Rolle of Boulder, CO and Keith Rolle of San Diego, CA; beloved great-nieces and nephew. Visitation will be from 10 until the 11 a.m. Mass of Christian Burial Saturday, August 2, 2014 at St. Lawrence Catholic Church, 2410 Morris Thomas Road. Rev Fr William Fider officiating. Burial in Polish Catholic Cemetery with Military accorded by the Duluth Combined Honor Guard. Memorials to the Salvation Army location of your choice would be appreciated. To sign the guestbook on line, visit www.wlbfuneralhome.com. Arrangements by Williams Lobermeier Boettcher Funeral Home.

To order memorial trees or send flowers to the family in memory of Glenn Rolle, please visit our flower store.