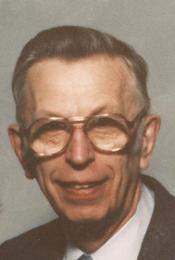 Gordon "Gordy" Edwin Nelson, 88, formerly of Brainerd Ave, died Tuesday, June 26, 2012 at the Benedictine Health Center with his family at his side. He was born August 17, 1923, the only child of Swedish immigrants, Edwin and Ellen Nelson (Olson). He was preceded in death by his parents and his first wife Elaine Melema Nelson. He remarried in 1963 to Lois Frances Watt. They were Denfeld High School classmates graduating in 1942. He worked at Minnesota Power for 41 years, retiring in 1983. He served in the U.S. Army in the Korean War as a Private First Class. He was a member of the Veterans of Foreign War Post 137. His name and rank are engraved on a brick at the MACV Tribute Wall where his service will forever be commemorated. He enjoyed attending events that his grandchildren participated in. A Minnesota Vikings fan, he enjoyed a Vikings win over the Packers. Gordy and Lois were mall walkers for several years. He was also a regular to the Lake Ave. Loafers and the West End Business Coffee Group. Gordy was active with the Minnesota Power Retirement Group. He is survived by his wife Lois; children, Janet Nelson, JoAnn Margo (Tom), Beverly Massie (Dale), Richard (Heidi), and Dennis (Beth); grandchildren, Kristopher (Kelley), Kevin Margo, Amy Massie, Kayla, Leah and Khloee Nelson. The family request donations to the MACV Tribute Wall, 5209 Ramsey St, Duluth MN 55807. Visitation will be from 5 to 7 p.m. Friday, June 29, 2012 in Williams Lobermeier Boettcher Funeral Home and will continue on Saturday in St. Benedict's Catholic Church, 1419 Saint Benedict Street from 9 until the 10 a.m. funeral service. Burial in Calvary Cemetery accorded by the Duluth Combined Honor Guard. To sign the guest book on-line, visit www.wlbfuneralhome.com.

To send flowers to the family in memory of Gordon Nelson, please visit our flower store.