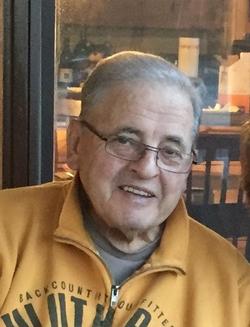 Harold Dean Puhl, Jr. age 78, of Duluth MN, died Tuesday October 20th surrounded in the loving arms of his family and friends. Born July 17th, 1937 in Duluth and was the son of Harold and Evelyn [Giese] Puhl.

Harold graduated from Morgan Park High School and boy did #27 have a love for football as he was an All-Conference athlete. In 1958 he married his high school sweetheart, Donna Radosevich, a Wildcat Majorette. Harold retired from Minnesota Power as the Line Superintendent in 1994, after 34 years of service. Any spare time between work and raising his family were spent at the Lake where he built the family cabin. That cabin hosted many "Long-Lake Opens." So many spent their summers there and many life-long memories were made.

His later years were spent with Donna attending his grandchildren's sporting events, fishing, golfing, car rides to his children's cabins, driving Miss Donna to the mall, eating at Black Woods where everyone took such special care of him. He grew up on a farm where his love of gardening began, and ended with tending to his fruit trees.

He was larger-than-life. If you were lucky to be in his favor, you would be told his most honest feelings or opinions he had. He was never one to hide his thoughts. That was one of his many traits that drew you to him.

Harold had many devoted life-long friends that were with him through thick and thin. George Delich, aka 2 bears and George Matetich. As well as his special friends Dennis Chelstrom, David Sundstrom and cousin Vern Giese. The recent loss of his best friend and brother Larry - weighed heavy on his heart.

We are forever grateful for the love and compassion our family felt from the entire staff at Miller Dwan ICU.

To order memorial trees or send flowers to the family in memory of Harold Puhl, please visit our flower store.