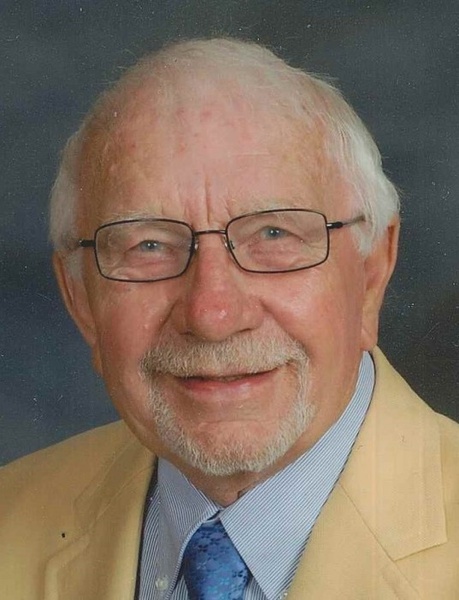 Hartley Edwin Conrad, beloved brother and uncle, 90, of Duluth, went to be with his Lord and Savior on Monday, August 26, 2019 of liver and lung cancer, with his sister by his side.  He was born of Swedish and Norwegian ancestry in Duluth, MN on April 25, 1929 to Edwin and Alice (Erickson) Conrad.  Hartley was a 1947 graduate of Duluth Central High School.  He graduated with a 4 year Bachelor of Mechanical Engineering Degree from UMD and a 2 year Chemical Engineering Degree from the U of M, Minneapolis.  He was employed with 3 Engineering firms in Duluth.  For the last 20 years, before his early retirement at 62, he was employed as an Inspector in the Building Inspector’s office in Duluth City Hall.  He was an active member of the former Bethel Baptist and North Shore Baptist churches, also Temple Baptist, now The Water’s Edge Church in Lincoln Park.  Hartley never married and had no children.  He was able to be “Dad” to his sister’s 3 children as she was a very young widow.  Always living at home, he had a steadfast devotion to his Mom and Dad, traveling and camping with them.  After they died, he gave his life to serving others thru numerous volunteer organizations in Duluth and nine mission trips to Petrozavodsk, Russia.  He received the 1995 Duluth Hall of Fame award by Mayor Doty, and the Sister Cities Volunteer of the Year award by Mayor Doty in 1997.  He is remembered for his love of family, great photographer, sports lover (UMD Hockey Team), travels to Scandinavian countries meeting his relatives, camping with “Gus” in Canada and Alaska.  Hartley’s family is grateful for the compassionate care provided by St. Mary’s Hospice assisting his sister, his caregiver, in his home. Also, we cannot express enough thanks to our long time wonderful family friend, Marianne (Phillips) Ritari for her tremendous dedicated help and companionship in so many ways with and for Hart these past 4 years. Thank you, thank you, Marianne!  Hartley was preceded in death by his parents, Edwin and Alice, and his sister Joyce’s husband, George.  He is survived by his devoted and beloved sister, Joyce, her children, Scott (Lisa), Caroline, John (Ruth), great-nieces Alex and Megan and great-great nephew, Jorge.   Many cousins and a host of special friends near and far.  Visitation will be Saturday, September 14, 2019 from 10:00 until the 11:00 AM Funeral Service at The Water’s Edge Community Church, 2202 W. 3rd Street, Duluth. Interment at Forest Hill Cemetery.  Memorials to The Water’s Edge Community Church, and Bethel University Seminary, St. Paul, MN.  Arrangements by Williams-Lobermeier-Boettcher Funeral Home.

To send flowers to the family in memory of Hartley Conrad, please visit our flower store.