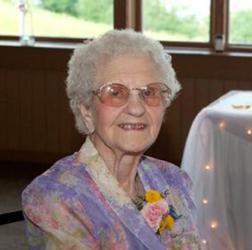 Helen Margaret Moland, beloved mother, grandmother and great-grandmother, died on Tuesday, July 15, 2014, just five days short of her 101st birthday. A lifelong Duluth resident, Helen was an active longtime member of the Lutheran Church of The Holy Trinity. A baker extraordinaire, she was well-known for her donuts and carmal rolls. She was preceded in death by her parents, Charles and Amy Udclaire, her husband, L.N. "Nick" Moland of the former Moland Bros. Trucking Company, and her Aunt Millie Mainella who was like a sister to her. Helen is survived by her children, Margot (Richard) of New Brighton, MN, Bruce (Elizabeth) of Nomokis, FL and Dean (Kathy) of Hermantown; a brother, Robert (Geraldine) of San Antonio, TX; seven grandchildren and nine great-grandchildren. The family would like to thank Helen's angel's, Cindy and Susie, and also the staff at Edgewood Vista Assisted Living for their support and loving care of Helen. Visitation will be from 10 until the 11 a.m. funeral service Saturday, July 19, 2014 in the Edgewood Vista Assisted Living Chapel, 4195 Westberg Road in Hermantown. Rev Greg Daher officiating. Private interment at Oneota Cemetery. In lieu of flowers, memorials to the Lutheran Church of The Holy Trinity or charity of the donor's choice are preferred.

To send flowers to the family in memory of Helen Moland, please visit our flower store.