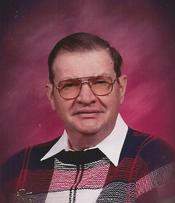 Herman R. Schroeder, 82, of North 64th Ave West, died Monday, August 20, 2012 in his home. He was born on July 23, 1930 in Douglas County, Minnesota to John and Johanna Schroeder. Herman graduated from high school in Morris, Minn and attended the University of Minnesota, Morris. In 1963, Herman started working for Duluth Avionics where he was an electrical specialist. The plant closed in 1970 and Herman started working for Larry's Radio & T.V., retiring in 1992. Herman married Esther Tjostelson on September 24, 1966 in Fergus Falls, Minn. Herman was a member of Gideon's International, Our Savior's Lutheran Church, the Friday Morning Bible Study group, Church Property Board, and was one of the three musketeers at church, fixing and repairing things. He was a man of service, always helping neighbors and friends and always with a smile. Herman had a passion for woodworking and several of his tokens can be found throughout his house and at church. He was preceded in death by his parents and seven siblings. He is survived by his wife, Esther; three brothers, William of Evansville, Minn, Paul (Hope) of Wisconsin and Theodore (Helen) of Calif; several nieces, nephews, friends and beloved grandchildren, Grace and Joseph Bergman. The family would like to thank Dr Mark Goellner and staff for the wonderful care. In lieu of flowers, please consider memorials to Our Savior's Foundation or donor's choice. Visitation will be from 10 a.m. until the 11 a.m. funeral service Saturday, August 25, 2012 in Our Savior's Lutheran Church. 4831 Grand Ave. Pastor Christine Anttila officiating. Burial in Bethlehem Cemetery, Fergus Falls, Minn. To sign the guest book on line, visit www.wlbfuneralhome.com. Arrangements by Williams Lobermeier Boettcher Funeral Home.

To send flowers to the family in memory of Herman Schroeder, please visit our flower store.