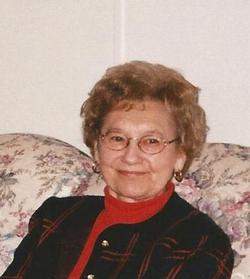 Irene V. Hamski, 86, of Duluth, died Friday, March 21, 2014 in the Benedictine Health Center. She was born October 1927 in Ashland, WI to John and Josephine (Blaski) Mason. She was a graduate of De Padva High School in Ashland and the College of St. Scholastica where she received her RN degree and BS degree in Nursing Education. She married Ray J. Hamski on September 9, 1950 in Holy Family Catholic Church, Ashland and then moved permanently to Duluth. She began work as a registered nurse for Dr. Swenson at the West Duluth Clinic. She was a staff nurse at St. Mary's for several years and was a nursing supervisor at St. Mary's from 1962 until 1968. She taught practical nursing at the Duluth Area Vocational Technical College from 1968 until retiring in 1983. She was a former member of St. Clement's and St. Jean's Catholic Churches. She was a member of Holy Family Catholic Church and its Rosary and Altar Society. She was a member of the St. Scholastica Alumni Association, the Duluth Retired Teachers Association and the Auxiliaries at St. Mary's and the Benedictine Health Center. She volunteered in St. Mary's Hospice program and in the Daisy Shop at Benedictine Health Center.

She was preceded in death by her parents; a brother, Richard Mason, a son, John and a grandson, Joseph Hamski.

To send flowers to the family in memory of Irene Hamski, please visit our flower store.